← B’Witches
An Interview with Doodle Pop → 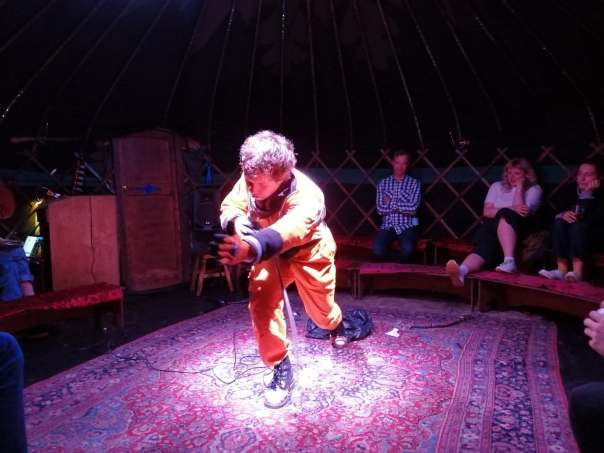 Last year I was completely blown away by Sam Nicoresti & his one-off ‘The Bedtime Funtime Go To Bed Right Now Show,’ an end-of-Fringe comedy special upstairs on the Blundabus. It was completely bonkers & brilliant at the same time, & in the intervening 12 months had often popped into my head at curious times of the day. I was delighted to discover Sam was back in the same precincts this year, performing a piece called UFO in the Spiegelyurt across the walkway from the Bus. Sitting down in the very-mini-circus-tent I was expecting some of the same nutmeg cartoonery from last year, but was instead transported into another dimension completely. UFO was more performance art, more story-telling, than comedy. So here we are, dear reader, in Mumble Theatre, for my instincts tell me this is where this hybrid really belongs.

Sam enters the arena in an orange suit & flashing helmet, 20,000 Leagues Under the Sea style. From here we get a series of champagne-bubbling anecdotes, Georgian soliloquies & the odd borderline rant; all of which end in him dropping to one knee, punching a single hand towards the stars, & revealing the agnostic title of the piece, such as ‘Underage F–able Object.’ A bit like Ian Brown’s song F.E.A.R.. Sam is a proper roulette wheel performer, whose restless physicality sees him spinning & swaggering around foot-to-foot, stilling a few seconds to let his gorgon-gaze fall for a moment on an audience member, before setting off on his cycle once more.

About half-way through his wikipedic, carnival patter through the eight dimensions, the orange suit suddenly reminded me of that analogue-age kids’ past-time called Etch-a-Sketch. What Sam was doing was exactly the same; drawing lines & pretty pictures along his thought-patterns, then wiping them off the surface of our psyches with a shake, a flourish & the aforementioned kneel.

The highlight of UFO was the nihilistic acceptance of a trip to Iceland, calling his psychotic drug-dealer’s bombastic bluff in an act of trustworthiness beyond belief. Luckily he survived the potential body-in-a-bog scenario, allowing us to laud both his sheer bravery & ability to supersoar vocally through its memories. Sam’s mind works faster than most people on the planet, & his mouth just about manages to keep up. I must also mention the way time absolutely flies by; all of a sudden Sam intimated we were approaching the end of the show. I looked at my phone & discovered I’d been sharing his dreamscape for 50 whole minutes, when it had seemed like 15. Amazing time dilation sheering off our trans-dimensional wayfaring!

When summing Sam up, I like to think of words like eccentric, rhapsodic, PT Barnum & a just wee bit gaga; but most of all I like to think of him doing his thing like nobody else can. Sam refuses to be typecast & whatever he’s got up his sleeve for next year will only be, well, by Sam Nicoresti.

← B’Witches
An Interview with Doodle Pop →