It was a pleasure to come back to the Oran Mor for the first play of A Play, A Pie and A Pint’s 2020 season, Camino. The stage was a welcome sight not only because of the weather (Storm Ciara was raging outside) but also because of its wonderful design. At the back was a kind of wooden blind with a bunk bed and some chairs and table making a kind of perfect space for conversation.

Sean Hardy’s story took us half way up a mountain in Spain where two couples were making their way to the summit. Mo and Donald (Kim Gerard and Lewis Howden) seemed to be the perfect couple, celebrating 25 years of marriage and addressing each other with endearments. Helen and Ken (Irene Allan and Keith Fleming), the younger pair married 10 years, were in complete contrast – passionately arguing and fighting at every turn, not to mention finding the lovey dovey pair a bit too much to take.

Things unravelled a bit as the four struggled for survival on the perilous journey – or was it the perils of marriage? Perhaps both. Certainly the four characters encountered many dangers and challenges both physical and romantic, and dealt with them in a fast moving plot that took them here and there across the stage, opening doors and closing them as their difficulties were exposed. Again and again the same issues would come up and somehow as they climbed they found the strength and courage to confront their problems. 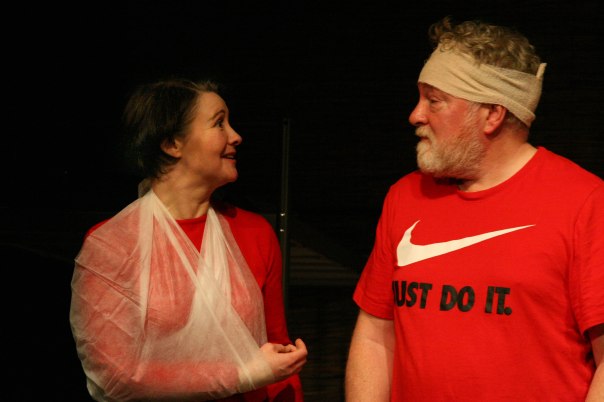 There was a very entertaining stand up element in all of this which had the four characters standing in a row like an ensemble and, telling their stories in quick fire succession, drawing us in and then letting us go again. There was a sense that they were dealing with the essential things in life, things to be taken to heart, but there was more laughter than silence in the audience because it was the jokes that prevailed. As they said, when you’re climbing a mountain far from home, as with marriage, things could take any turn at any time – “What could go right?” An intriguing and laugh-, not to say thought-, provoking start to the season – well worth a visit!

Posted on February 12, 2020, in Scotland. Bookmark the permalink. Leave a comment.