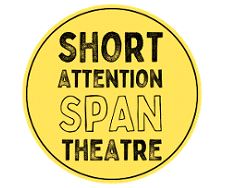 Audiences will be seeing double next week as a pioneering theatre company serves up its latest innovative slice of culture in quarantine. Short Attention Span Theatre (SAST) will be streaming six double-hander plays online and free of charge from Thursday 25th June – featuring some of Scotland’s best up-and-coming creatives. It follows the success of the company’s virtual shows in May, which featured 12 magical monologues – watched by hundreds of viewers ‘live’ and later on YouTube, as well as SAST’s own website. The next show will present six short plays – written, acted and directed by talents from Glasgow, Edinburgh, Aberdeen, Moray … and even further afield.

Each will star two actors – filmed from a virtual distance to adhere to lockdown restrictions, using a variety of dramatic techniques. They will be available to view from Thursday (25th June) onwards. The plays will be:

Through the Door by Leanne Cameron
Lucy has locked herself in the bathroom and is refusing to come to her Dad’s 60th birthday party because she’s fed up being compared to her sensible sister, Jess. Jess is trying to convince her to come out and that everything will be ok, but not before going through the emotional roller coaster that is sisterhood. Will Lucy come through the door?

Smells Like Cheap Spirit by Jamie Graham
Mandy is spending another night in front of the TV and has treated herself to a takeaway pizza and a bottle of gin. She’s feeling a bit down in the dumps after recently losing her job and still not having anyone special in her life. But the evening takes an unexpected twist – and it’s not just the lemon in her gin.

Acquiesce by Alan Muir
Two men. Two prisoners. One wall.
For years they’ve been kept captive in neighbouring cells, forced to share their fears and secrets with each other – and the stone between. But now there’s a chance at escape. For one of them at least. The problem is, freedom comes at a cost. It always does.

We Keep Going by Rachel Flynn
David and Zoe had a one-night stand that lasted a whole weekend just before lockdown. Now they actually have to get to know each other without sex, can they keep their intense connection over video chat, without the ability to touch? Or will they realise they’re not the people they thought they were?

Tom Brogan, Co-founder of SAST, said: “The reaction to our online shows has been extremely positive. We can’t wait to bring audiences six new virtual two-hander plays – all streaming free to your computer or device. Like everyone, we’ve had to adjust to the ongoing pandemic and it has presented a unique challenge creatively. I’m delighted with the innovative ways our writers, directors and actors have worked together – many miles apart – to produce new works to help lift people’s spirits during this testing time. Once again there’s a range of subject matters and genres, with something for everyone. Please tune in. Don’t worry if you can’t watch ‘live’ on YouTube or via our website – all the plays will be available to view again afterwards and you can catch up on previous shows too.

Here at SAST our goal is to encourage, support and inspire early-career writers and theatre makers. The online shows are a way of continuing that work, while hopefully entertaining people sheltering out the coronavirus storm at home. There’s no cost as such, but if anyone wants to buy us a ‘virtual cuppa’ then we’d be delighted to accept. All donations will help to fund future work.” Tom added, “Hopefully – all being well – we will be back on stage in the autumn with live shows in Glasgow and Edinburgh. Until then, please stay safe … and enjoy the shows.”

So far, SAST’s April show has had nearly 800 views, with May’s plays racking up nearly 1,000 views. SAST was established in 2015 by Karen Barclay and Tom Brogan, and is now run by Karen, Tom and Mairi Davidson. It was set up to enable first-time and early-career writers to experience their work being dramaturged, directed, rehearsed and performed in front of a paying audience. Prior to lockdown, SAST had mounted 24 live shows in Glasgow, Edinburgh and Ayr – producing the work of more than 100 writers. It receives no funding so if you want to help support future work please consider buying the company a ‘virtual cuppa.‘

Posted on June 19, 2020, in Scotland. Bookmark the permalink. Leave a comment.