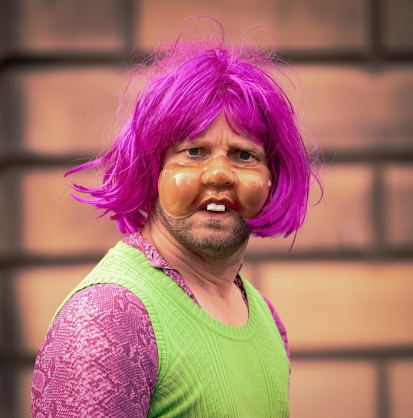 Ralf Wetzel has created a strange & sexually sensual, quasi-androgenous character which will stick in the memory for a long time, I am sure. Let me for a moment attempt a portrait of Ralf’s ‘George,‘ beginning with his outfit. For a start the toothpaste green tanktop is too shrunken, revealing the belly & its button. The flies on his shorts are undone, revealing pretty garish underpants; while equally as garish is a viscious-pink wig. The mask is completed by cute, prosthetic gerbil cheeks, which lead our eyes into his own azure orbs – a quite hypnotic overall effect.

Overall, the message of the play is driven by the context in which you watch it. If you put the show into a different perspective, you see something different. We discovered that it’s like a prism. It will break light accordingly to how it is projected onto it. Masculinity is one angle, femininity might be another.
Read the full interview…

The script courts the mundane, on purpose I believe, but the way Wetzel works his ingenius character’s words & mannerisms is an amazing watch. So much so, the story sometimes gets drowned in the performance. The beautiful & deformed gargoyle that is George comes across sometimes creepy – like serial killer weird – & sometimes catching our sympathies with sweetness. There is a duality, Boderline Personality Disorder perhaps, with Wetzel fluctuating between polarized emotions in an astonishing instant – like a magician’s flip of a card –  in the same effortless fashion that his 18th century compatriot, Konrad Ekhof, handled both tragedy & comedy famously well.

At the core of Absolutely Reliable is the mask; & the play was very much born from it, with Wetzel playing the archmagus weaving it all to life. He is a superb performer & it is a most addictive & fascinating experience watching him surfing on his own intensity.