← The Ching Room
An Interview with Samson Hawkins →

An Interview with Steve Attridge

Hello Steve, so where ya from & where ya at, Geographically speaking?
I’m a Londoner. My Dad was a blacksmith in the East End and my Mum worked in an eel and pie shop. I’ve lived in Warwickshire for over 20 years now but I also have a place in Spain where I go to work – no Internet, no TV, no landline. A study and laptop. Mountains. Sea. Wine. Brilliant.

You are an internationally renowned writer, but when did you first realise you could do it?
I always wanted to be a writer. It was an imperative. I would have done it even if I’d had no success. Getting my first things published and broadcast made me realise I could entertain an audience, whether one reader or a bunch of people watching a play or film or TV. In the late 1980’s and early 1990s I suddenly hit a rich vein in terms of getting work.

When did you first find yourself getting into the dramatic arts?
I think when I started lying to get out of trouble. The power of imaginatively reawakening the world. Also as a kid when I realised that if I could entertain people by making them laugh or gain their interest and curiosity, then they would be less likely to beat me up. I think life is theatre anyway, it’s just when you try to do something for the stage you must heighten and distort and cut out the boring bits. I think most people do that in their heads anyway – we’re all the central character in our little dramas.

Theatre is not the only string to your bow, you are quite the polymath: what else interests you in the artistic spheres?
Everything connects really. For example, if you write reasonable poetry it makes you a better writer of dialogue. I worked as a performance poet and still write the odd poem. I’ve written a lot of film scripts and been lucky in that some of them have been made. I’ve had about 100 TV scripts broadcast. I play guitar and have written a couple of musical plays. And I love the solitude of writing books – had 20 published so far. Good writing can be an eclectic animal and go on diverse journeys.

What does Steve Attridge like to do away from writing & performing?
Passionate about playing tennis. I used to love football too but got my nose, my leg and my arm broken and realised it was time to stop as I was running out of bits of me to break. I like gardening, music, walking. Watching animals and birds.

What for you makes a good piece of theatre?
Not boring the audience. Keep it moving. Keep it lively. Throw in a few surprises. Make it jump. So many plays are too long and pleased with themselves.

You will be bringing Dick in Space to Edinburgh this August, can you tell us about the play?
It’s a seriously bonkers piece of comic theatre about an intergalactic film noir detective hunting a murderer through space. Dick Spacey, the main character, has multiple selves and cannot always distinguish between himself and others and has bizarre and powerful relationships with inanimate objects and invisible presences. It’s psychologically a bit surreal and bizarrely physical in terms of language and action. Someone said the character is like Tom Waits on amphetamines. A lot of jokes and one liners but also connecting plot lines. It’s an unusual piece. 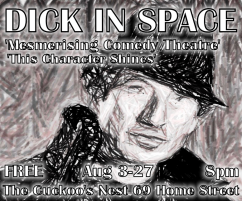 There seems to be quite a mish-mash of contents & styles – what holds it all together?
A strong central character, running jokes, a sense of a personality and world falling apart in surprising and entertaining ways. The play creates a little world of its own. There are lots of elements in the pot but it’s all one stew.

In one sentence can you describe the experience of performing in Edinburgh in August
O brave new world, that has such people in ‘t!

What will you be doing after the Fringe?
Sleep. And then I go to Spain to work on a new novel.

What does the rest of 2017 hold in store for Steve Attridge
Just getting up and working. My new novel calls and I have a backlog of work to get out there. I may also learn to become invisible.

Steve Attridge will be performing his ‘Dick in Space’

Posted on June 16, 2017, in Uncategorized. Bookmark the permalink. Leave a comment.

← The Ching Room
An Interview with Samson Hawkins →