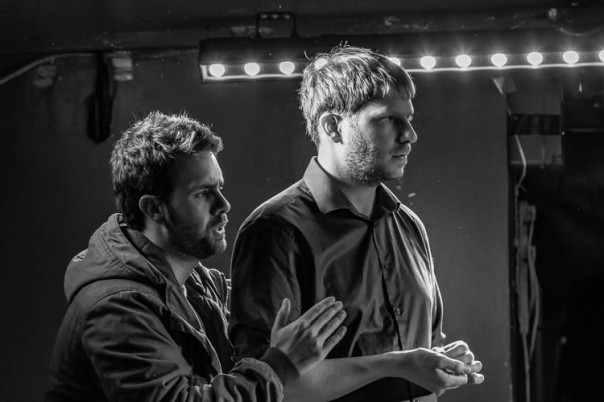 Mr Stewart Schiller is a pioneering young gentleman from Glasgow, who finding himself drenched in a music-mental conurbation is becoming ever more determined to bring theatre – affordable, pay-what-you-like-in-a-bucket-as-you-are-leaving kinda theatre – to his people. Last night I caught the 3rd of 4 performances round venues in Glasgow normally reserved for things rather less theatrical : Dram, Canal Station & Broadcast on Sauchiehall Street, where I found myself watching The Ching Room by Alan Bisset. Stewart had come across the play while looking for a decent one in his local library, & in a recent interview with the Mumble described his engagement with the play; ‘The Ching Room’s one of these plays that just jumps off the page. I try to read as many plays as I can and, after awhile, they can start to blend together. The Ching Room though is really arresting. It describes seedy acts with beautiful language, whilst also being really funny. That’s a rare combination that gets me really excited.’ 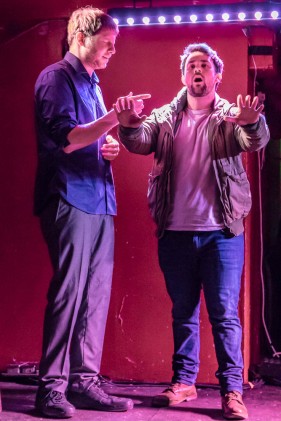 The set was sparse, although the entire thing was supposed to be set in a toilet cubicle, so I guess that didn’t matter. The two youthful actors, however, were smashing & eloquent & genuinely authentic. Rory – played by Simon Devon – crosses the sacred boundary into the Ching Room, where Darren – played by Alex Dodd – is holding his snowy court ‘on official nightclub business’. Well-toured & experienced, both actors crackled with chemistry (& chemicals) as they played out Bisset’s dramaturgical remembrances of a night or two on the tiles, one expects. In fact, the three of them managed to completely turn the seedy, urine-stained, drug-cutting, money-blagging, arrogant-sweating temple that is the coke-users toilet into somewhere quite fluffily enticing. In the Ching Room, drugs are good. It was all quirkily compelling, & full of great lines such as, ‘you don’t hurry Boss Ching, sir, Boss Ching hurries you.’ Then into the mix comes some saccharine poetry – but in a good way – & emotive backstories which are in the main believable & contribute to the overall effect of a short, snappy trip to the bogs with a couple of likable geezers. I’m really glad that Stewart Schiller brought this play back to life, for there are some beautiful & funny moments that go on in the lands of druggy hazes,  but unfortunately no-one can remember them!

Posted on June 13, 2017, in Uncategorized. Bookmark the permalink. Leave a comment.