Shakespeare’s poetry is beautifully brought to life in a wonderfully physical and energetic production. The audience barely has time to draw breath as the rich comedy unfolds. It is an ensemble piece bathed in shades of light that warm the heart on a cold night in Glasgow. Each actor pours sinew and soul into their performance: gesture, comic timing and focus are all interwoven with a forceful precision to produce a highly polished theatrical event. The set verges on the minimal but is easily sufficient, letting the language and poetry of the play breathe its magic; lighting, costumes and music enhance the text and performances without intruding, indeed, they form a theatrical whole that is a pleasure to experience. 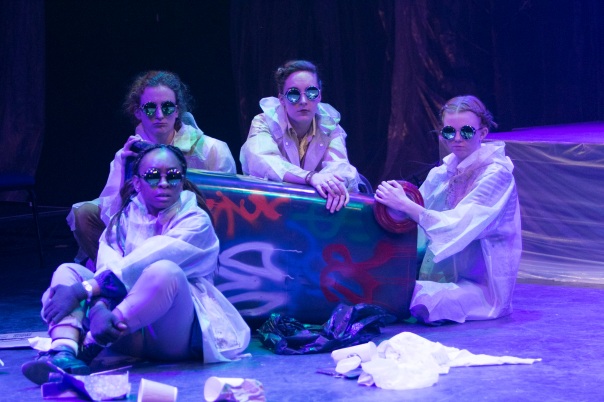 The play raises questions on many levels: the role of women in society, power relations between classes and social groups, and, the power of propaganda and social customs in forming behaviour patterns to name but three. As with Iago in Othello and the witches in Macbeth, Oberon, Puck and the Fairies somehow manipulate the minds of the lovers with only Hermia remaining true to herself throughout the play. In distinction to what we are generally led expect from drama, that events and conflicts change the consciousness of a character, Hernia is the only character who remains as clear sighted at the end as she was at the beginning. And the conclusions to be drawn from this are no doubt many and varied. Never the less, the cast performed with such verve that the deeper considerations came later and during the performance the audience were immersed in a spellbinding comic dream.

The best use of a wheelie-bin in any play ever can be witness here. This a fine production, especially if you like the lines delivered quickly and the entire space occupied by the actors to full effect. As entertainment it is excellent: a performance poem for many voices delivered seamlessly with the force of DV8 physical theatre production.

Posted on March 27, 2017, in Uncategorized. Bookmark the permalink. Leave a comment.