← Hoichi the Earless
An Interview with Ralf Wetzel →

An Interview with Three Chairs & a Hat 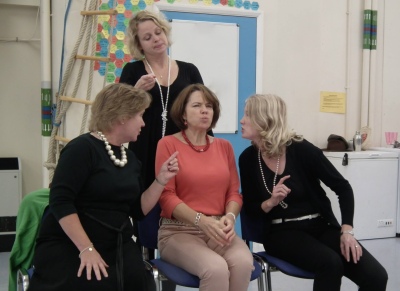 Verity – ditched at her wedding, nagged by her mum, hates her job … and it’s only Monday. Nia Williams is bringing her new musical to the Fringe 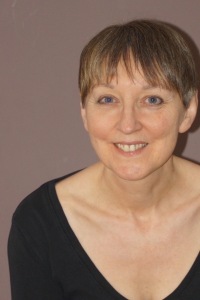 Hello Nia, so where are you from & where are you at, geographically speaking?
Nia: Hello! I’m originally from Cardiff and grew up in a Welsh-and-English world, with a bilingual family and education. I left Wales to study at Exeter University and have lived in a few places since, but I’m now based in Oxford.

Hello Saffi, so you’re playing the lead in Nia’s new musical, Verity – can you tell us a little about your training?
Saffi: Hello! Yes, I have just spent the last academic year training at Guildford School of Acting on their musical theatre foundation course. Prior to that I was at Abingdon and Witney College, studying Performing Arts, and have been a part of different theatre schools since the age of 6.

What is at about Musical Theatre that makes you tick?
Saffi: It’s everything! There is really nothing that can compare to the feeling of being on stage and performing. The butterflies as the house lights go down, the adrenaline as the curtain rises, and the feeling of pride and pure elation as you take your bow and see your family, friends and complete strangers in a standing ovation. But I think the thing that really makes it for me is the ability to stand on a stage and tell a story that can reach and affect hundreds of people you don’t know, and for those three hours or so everyone can escape the troubles of their own life and can lose themselves in the story. For me, that’s the real magic.

Can you tell us about your links to the English National Ballet?
Nia: I’m a freelance musician and writer, and part of my work is as an Associate Artist for the ENB. I work for their Engagement Department, delivering workshops based on their current ballet productions. That can involve going into schools or dance classes with a dance artist, but my main role is with the Oxford hub of the ENB’s Dance for Parkinson’s programme. It’s a wonderful project, giving weekly sessions for people with Parkinson’s Disease. I co-lead them with two dancers, and we use music, stories, characters and choreography from whichever work the ENB is performing, to build a workshop that helps participants move more freely, express themselves, project their voices and use their creativity. It really is magical, and one of the most rewarding parts of my job. In a world where you can get entertainment ‘on demand’, what makes theatre special?
Saffi: The fact that you will never see the same show twice. Don’t get me wrong—we will work and rehearse every hour of every day to get the choreography right and make sure we are singing the right words, but performers are just human; things happen; a prop might break, someone might miss their cue—but as a performer you have to make it work. You can’t just yell ‘cut!’ and take five to fix the problems. Also, when you are in a theatre you get to decide what you see: you can decide where you want to look, what you want to focus on: there isn’t a camera making that decision for you. So you can make your own opinion, which will probably be completely different to the person sitting next to you. You also get to be there, with the people on stage, and personally I find myself much more invested and connected to the characters if they are real and standing in front of me. They’re not just a picture on a screen.

Who are Three Chairs & a Hat, & what is your role?
Nia: I created Three Chairs and a Hat to stage the musicals that I write. For years I’ve been harping on about wanting to have my own theatre company and do things my own way … and it suddenly occurred to me that I should stop moaning and do it! The name comes from my love of pared-down theatre that uses minimum props and set, maximum imagination. We’ve cheated a bit with Verity and used four chairs—but my other current musical, ‘Melody’, makes up for that by only using two! 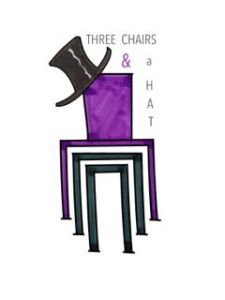 You are performing in Verity at this year’s Edinburgh Fringe; can you tell us something about it?
Saffi: I don’t think excited is a big enough word! Verity is such a wonderful show, with amazing music and a relatable and touching story line. I feel incredibly lucky to be making my debut with such an incredible show and with such an awesome cast and creative team! All I hear about the Fringe is how amazing it is and how lucky I am to be going and I just can’t wait!

As the creator of Verity, how much of the show is fed by your own life experience?
Nia: You know, if you’d asked me that even a year ago, I would have made a joke of it and said ‘not much!’ Verity’s life is in a mess, she seems to be in a downward spiral, bored with her job, annoyed by her family, devastated by the events in her love life. But as we’ve been rehearsing for Edinburgh, I’ve thought more and more about the fact that Verity, as well as Eileen, the apparently dull PA in her office, both find the confidence to be themselves—or at least to begin that process. And in a way that’s what I’m doing with the development of my writing and Three Chairs and a Hat. It’s about that really tricky thing of taking your work seriously—not in a braggy or pompous way, just being prepared to say: ‘this is what I do, and it’s important to me’. For Verity, that’s about redefining herself after her disastrous wedding; for Eileen, it’s about acknowledging the importance of the work she already does. But I think it’s something that feeds into everyone’s life experience, in a way. 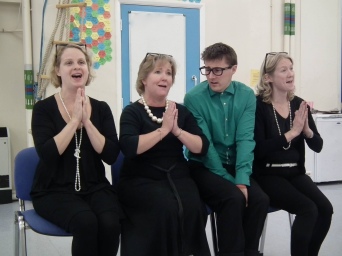 Verity is your fourth production; what have you learnt about Musical Theatre since your first musical, Daddy’s Girls?
Nia: I think one of the most important, and exciting, things that I’ve learned is how much a musical, or any piece of theatre, is the creation of everyone who takes part in staging it. It’s amazing to see the director, cast, technician, costume lead bring their own vision and ideas to the work—especially when they bring out things I’ve never really thought about myself. It’s quite moving when you find the courage to put your weird ideas out there, and then people buy into them, take them seriously, and build them into something more. It’s all part of the whole storytelling process, and I’m learning from it all the time. 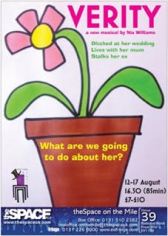 Can you tell us about the rest of the cast & the dynamics between you all?
Saffi: The cast is one of the best things about this show. I came in later than the others, as I have been brought in for the Fringe, and to be honest when I started I was a bit worried that I was going to be a bit of an outcast, as they’ve been working on it together for a few years. But I couldn’t have been more wrong! I know it’s always said, but we really are like a family. Everyone is so lovely and supportive and crazy talented. I can’t wait to spend a week exploring Edinburgh and performing with these amazing people.

What is the biggest obstacle you overcame while putting your show together?
Nia: This comes back to your question about what I’ve learned about musical theatre. One thing I learned was: everything possible will go wrong—but keep going anyway! Since we first started putting the show together a few years ago we’ve had about seven changes of cast, for various reasons, some of them tragic, all of them to do with the unexpected curveballs of life. Three years ago one of the cast, my dear friend Becca Allison, died suddenly after contracting sepsis. I thought at the time that we would never stage Verity again, but Becca was always hugely supportive of and enthusiastic about my projects, and when Jenna Elliott joined the cast in that role she revealed that Becca had been her singing teacher and had first introduced her to musical theatre. It sort of seemed right—and Jenna has fitted in brilliantly with the rest of our fantastic cast.

You’ll know a good show when it’s happened, what are the special ingredients?
Saffi: Working hard, laughing lots, being a team and loving every second of it! Because if you as the performers love it then the audience will too… and I can promise you, we love performing this show!

You’ve got 20 seconds to sell the show to somebody in the streets of Edinburgh, what would you say?
Nia: Songs, laughs, calamities, some rude cocktails, a touch of online stalking and if all else fails, a picture of a cat!

The Space on the Mile 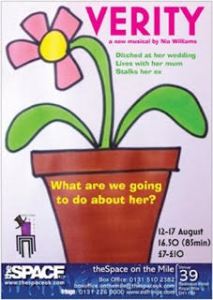 ← Hoichi the Earless
An Interview with Ralf Wetzel →