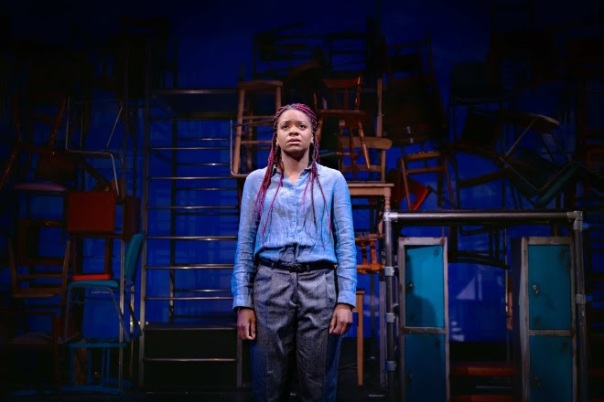 Random is a solo drama, written by Debbie Tucker Green for a solo female performer. It was originally performed in 2008 and later adapted into a BAFTA winning drama for Channel 4. This production was directed by Gbolahan Obisesan and stars Kiza Deen in the roles of Sister, Brother, Mother, Father and many other supporting characters.

The first thing that catches the eye is the rather striking set – a backdrop of haphazardly stacked chairs that evoke both the title of the play and that neatly visualises the idea of a household turned upside down. Hidden amongst the chaos are odd anchors of normality – a fridge and some school lockers. As the play begins with undercurrents of foreboding that bubble beneath the bright and lively dialogue, the starkly lit stacks of furniture are a threat of looming chaos over the family as they otherwise blissfully head into what is destined to be a catastrophic day.

The story begins with Sister’s reluctant conversation with her alarm clock. As she gets ready for work, she keeps a running track of time that continues throughout the entire play, providing an increasingly urgent momentum. The script provides small but vivid and relatable details of mundane family life – the stench of Brother’s bedroom, an argument about burnt porridge, Mother’s disdain of her children’s inappropriate dress sense, the preparation of unpleasantly sweet tea for some unwanted visitors. A seam of gentle humour runs throughout the dialogue as Deen addresses the audience directly, drawing them into the events as they unfold, who become unwitting members of the extended family group. The entire audience was alive with ripples of laughter in reaction to her engaging and lively performance.

The dialogue itself is certainly the play’s strongest asset – each member of the family speaks with their own distinct rhythms, their own language. Mother has a thick Caribbean twang, Father is gruff monosyllabic, Sister is sassy and confrontational and Brother is cocky and disarmingly charming. Deen’s delivery and performance sells each individual character as she bounds across the stage one moment as Brother and then freezes into the stiff and guarded Father. The dialogue has a real poetic quality, breaking out at times into almost-verse, transitioning between more formal soliloquies and conversational dialogue between the family members and the audience.

For a solo performance, rapidly switching between characters is a hugely demanding task and Deen mostly sticks the landing here. The main distinctions between the characters lie in the shifts of tone and dialect, propped by with subtle shifts in body language. These distinctions are more pronounced as moves energetically across the stage, however the lines are far more blurred during intimate and static moments and can cause at times a certain confusion as to which character we are hearing.

The lively opening act is brought to a jarring halt as the titular random act of violence throws the family into crisis. The tone of the performance shifts into more muted territory, the humour becomes either bitter or non existent and the interplay with the audience cuts away, leaving the auditorium buried in a thick silence that conveys just as much as the dialogue. Throughout the performance, the lighting is barely perceptible yet thoroughly effective, taking the space through the various times of day – it starts in the darkness of pre dawn, then shifts subtly to the light of a cold yet sunny day and then brings it round back full circle to the darkness of night, a darkness that has consumed and inevitably changed a family that was only an hour before comically arguing over breakfast.

Given the striking nature of the scenery, it felt starkly distant from the action on stage and despite some perfunctory use of the lockers, it had potential to lend itself more fully to the performance and create a more intimate picture of a family home and a surreal depiction of a family home torn asunder by tragedy. That said, any quibbles are minor and the silence that descended in the final moments of the performance were testament to the play’s true power. The story comes round full circle with a solitary character sitting with their back against a wall, simultaneously ruminating on how much has changed and raging in denial of this very change. Where once warm laughter had been heard around the room, this were replaced with tears.

Random provides the stark personal context of knife crime, something that is all too often reduced to a statistic. This play is anything but random in its careful, precise and powerful detailing of how these statistics affect real lives.

Posted on February 9, 2019, in England. Bookmark the permalink. Leave a comment.