← The Extinction Event
Losing the Rag → 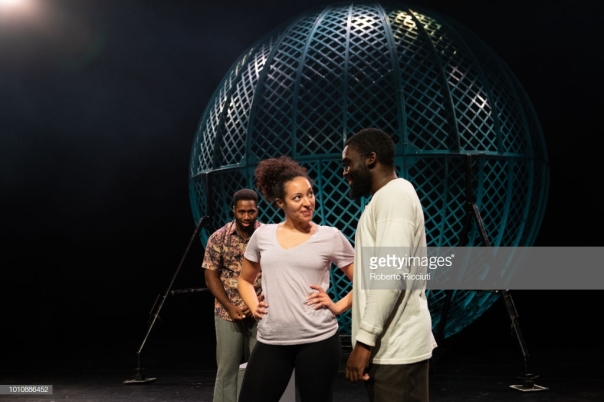 It’s always a pleasure to be back at the Pleasance Above venue, with its high seats and sloping design. The stage took up half of the room, promising powerful performances. Strictly Arts have worked with award winning writer Camilla Whitehall to create the Freeman extravaganza. The subject is crying out for our attention, perhaps impartial attention; the wilful shooting of black Americans, the aftermath, the police acquittals. It begins with silent story-telling, a silent yet deafening explosion of physical posturing involving all six actors, a scene where they were all tossed high and low, almost throwing each other around. It was very impressive, introducing the plot loudly and proudly.

They were all dead, killed by the police. In the after world they compare their horrifying deaths and the identity and life so brutally taken from them. We had William Freeman who died just before his retrial In Auburn, August 1847. He was beaten and tortured so savagely by the Police that he couldn’t recognise himself or his mother. And Sandra Blaund; after she was beaten by the police she was found having apparently hung herself in her cell. The stories go on well into the night (so to speak) and much was made of every case, told by the victims of each atrocity.

The play flowed in music, song, dancing, using tricks like shadow dancing for effect and acrobatically balancing on top of each other to depict cars and other artefacts. Each one of the 6 deaths, tragedies that gave us a sickening feeling in our guts, were thoroughly explored from every angle. At the same time examining the human condition, showing us something that was complex and cruel. The subject turns to mental illness, where people were considered mentally unstable and consigned to bed for 21 years as some inane idea that it would be good for them. “Rage against the dying of the light” (to quote Dylan Thomas) they boomed with the full force of six voices. In 1949 someone stowed away on a boat and found himself in the rock n’ roll era. When the stage turned into a magnificent dance hall of the American 50’s, they all danced and swung. It was around that time that use of electro therapy was used to solve these problems with blatant disregard as to the effects thereof. The horror continued.

The Male Caucasian was put on trial to convey the privileges he had compared to Africans. Negros, fellow human beings, were kept in a submissive state, “a condition of the mind…” Needless to say this was achieved by means of whipping. The accused stood there and sang about the favours of whipping and how pleasant a good whipping would always be. An image of blood ran down the screen at the back of the set, that was roof to floor, they all died again and a pitch fork stabs a rice bag for effect.  When Sandra Blaud was stopped by police, irritating her, she argued with him and things escalate into a heavy handed scene where she was brutalised and degraded. The officer, explaining that she resisted arrest, pins her to the floor and declares that she deserved it. She was devastated and sits there weeping loudly in grief. She takes out her phone demanding the right to film. The films we sometimes see on Facebook are but a glimpse into the worrying unease at the heart of American law enforcement. Being brutalised for a failure to indicate seems absurd.

Anger caused William Freeman to kill four people, the system called him insane and lobotomised his memory, he couldn’t recognise friend from foe. He struck out in rage and anger. Good old fashioned racism means that names get forgotten. Remember our names they whisper as the stage darkens. The power and emotion of this performance will stay with you for a long time. It will send you home rightly raging against injustice, determined not to forget.

← The Extinction Event
Losing the Rag →