← Thrill Me
Not About Heroes → 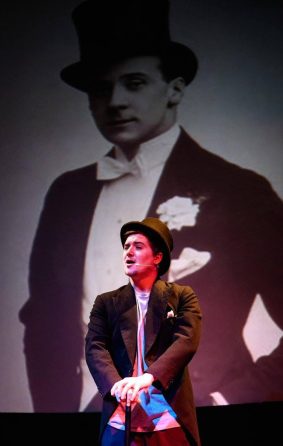 A war story, a friendship story, a mother and son story and a historical story, Fall of Duty is a slick mix of media presented bare bones by two players. The story begins with a video call of a mother, Sue, trying to convince her adult son, Jack, to put down the video game controller, get out of bed, and get involved with the world around him. Sue is an academic, interested in historical lesbians, and has received funding to do research and put on a show about World War I era entertainment duo Elsie Janis and Basil Hallam. Jack is reluctant to join his mother’s project, but as he starts research on Basil he finds a synchronicity between the historical life and his own.

I enjoyed the juxtaposition of modern and historical in the show. Jack’s world of video games and rap music is injected with 1914 theater music. Hearing the story of Basil Hallam and Elsie Janis made me think that in their time the entertainers gave relief to the soldiers facing the horrors of war. Today, video games make war an entertainment for people who are ignorant of any of those struggles, waged only a century ago. The actors do a great job of bringing to life the music from 1914, even helping the audience to sing along. This is a unique story of a mother and her son’s modern relationship, and also a riveting look into the lives of the people who fought in WWI.

Posted on August 12, 2017, in Uncategorized. Bookmark the permalink. Leave a comment.

← Thrill Me
Not About Heroes →