← The Rivals
Alice in Wonderland → 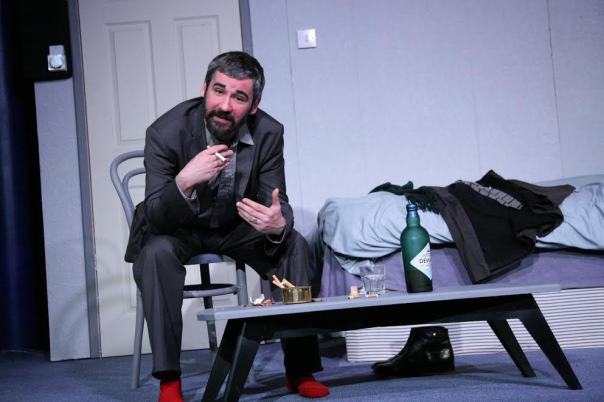 This peach of a play by the late great poet and writer Willie McIlvanney ( Laidlaw, The Papers of Tony Veitch and Walking Wounded )resonates all the more having been revamped since its first airing in 2004. Energetic and genuinely funny insights into the  twists and turns of new divorcee John Mitchell,(Iain Robertson) will have you in stitches, this is Oran Mor’s magical theatrical hour at its shiniest best.

From the set to the lighting – not to mention the audience participation – and finally to the acting itself , this well scripted piece of west coast escapism does just what you want it to, it transports you out of your own head. John, romantic idealist who has nothing to show for his 16 marriage except some spellbindingly funny memories entertains us with words of wisdom as well as his upbeat approach to what can only be called dire circumstances , have you ever seen someone fill the kettle with the water from their hot water bottle?.And make you laugh watching him do it?

Optimist John guides the audience through the antics of his latest love life with patter that is as fresh now as was when penned over a decade ago. Such capers hit the spot because the raw Weegie underworld is never too far away for John, even in the midst of his suave dalliance with Sally who he believed to be ‘ the one.’ His amorous toyings with the lovely Sally end differently than he imagined but there is no doubt that he won the heart of the audience even if he doesn’t manage to find the woman of his dreams.

Excellently directed by Gillies Mackinnon (Small Faces)invited by Robertson who played thirteen year old Lexi in his semi-biographical feature film twenty two years ago to direct McIlvanney’s one man performance. What more could you want? Don’t miss this chance to see this riveting play by the father of Tartan Noir who wrote 1985 movie The Big Man ( Liam Neeson, Billy Connolly) and won a Bafta for his screen adaptation “Dreaming”.

Posted on November 15, 2016, in Uncategorized. Bookmark the permalink. 1 Comment.

← The Rivals
Alice in Wonderland →