This week’s offering at Oran Mor saw the return of Ian Pattison’s play “Divided”, about the iconic psychiatrist, RD Laing. The scene was set in a stylish art deco living room with three comfortable chairs and an extra podium at the front where Billy Mack relaxed and likeable Laing would sit with a whisky at his desk while he talked on the phone. We listened in as he took many calls from various characters, dealing in depth with each.

The play explored the way Laing would constantly come across the then behavioural dysfunctions of mental health treatment, which he saw as not humane. And so, as the action unfolded, these dialogues revealed the universal insights and the great passions that characterised his life. Alongside his work, life was happening for him too. Both of his daughters, Suzie (Sarah Miele) and Karen (Eve Traynor) would want to talk to him, but there was always some sort of barrier that meant that they felt he wasn’t quite there. It was sad to see this side of things, but although there were many arguments you got a strong sense of the family love that existed between them and that always helped them sift through to find the truer meaning – very much the work of the psychiatrist. 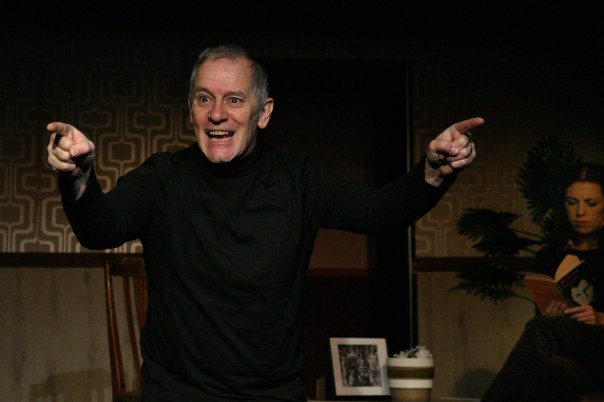 Laing was portrayed here as being defined by the huge regard he felt for his family and lovers. There was a dilemma regarding the hard fact that his daughter Suzie was ill with leukaemia and in all reality did not have long left to live. His love for her ‘perhaps’ conflicted with his philosophy; that it is better off to know bad news than to conceal it. After passionate arguments with his other daughter Karen, he decided to adhere to that philosophy causing Suzie to become upset though she later revealed that she was glad that he did so, while Karen too accepted it in the end.

This production had the taste of a fair-minded exploration into what made the great man tick, both positive and negative. It was also a dedication to a time when old walls were falling down and new doors being opened. Laing’s new theories about the doctor patient relationship would go on to change everything; a fascinating insight into a complicated mind.

Posted on October 15, 2019, in Scotland. Bookmark the permalink. Leave a comment.