An Interview with Glen Williamson

A mercurial talent is bringing his personal twist on Goethe’s darkest tale to the United Solo Festival, New York

Hello Glen, first things first, where are you from & where are you at, geographically speaking?
I live in New York City and travel and perform all over North America and Europe, especially Britain and Ireland.

When did you first develop a passion for theatre?
My mother says I started acting when I was two. Then I tried to organize neighborhood children to put on plays. I did a lot of children’s theater and community theater as well as school plays.

Can you tell us about your training?
I trained at The Juilliard School, at the American Conservatory Theater in San Francisco and in Michael Chekhov’s approach to acting. I’ve also done a movement training called Spacial Dynamics. 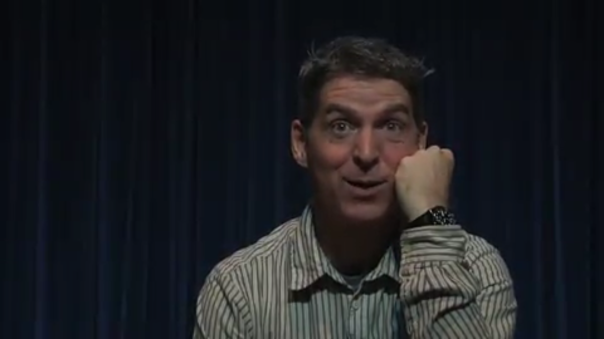 Can you tell us about Anthropos & your role?
Anthropos is my touring-production company. It received its name in 2010 to acknowledge the spirit of what my colleagues and I present and the impulse to create and perform stories and plays of unusual scope and humanity. Anthropos is the Greek word for human being. We seek to uphold and celebrate what is truly human, through the arts of theater and storytelling.

You’re bringing a play to the United Solo festival, can you tell us about it?
Friday, September 20 at 9pm. Beat the Devil!
FAUST
(the WHOLE story)
by JW von Goethe and Glen Williamson
(his drama, my words)
It’s the story of a guy who makes a bargain with the devil, but Goethe gives it a twist, so the devil gets more than he bargained for. It’s purely theatrical storytelling that fills the stage. And it’s relevant, timely and timeless.

You have also toured North America in The Refugees’ Tale, based on Goethe’s Green Snake parable, so what is it about the greatest German poet that makes you tick?
As a consequence of the horrible tragedy of the 20th century, much of the depth and spirit of middle European culture has been lost or debased. It’s part of my mission in life to bring that spirit to life. Goethe, the greatest of many great German poets and philosophers, was also a scientist who laid the groundwork for reuniting western thought with spiritual reality.

Where & when did the idea for Beat the Devil! originate, & is the reality fulfilling your vision?
When I was 21 I was sent through an exchange program to work as a stage hand for the full production of Goethe’s Faust in Dornach, Switzerland, and I fell in love with the story, the characters, the ideas, the imagery and the poetry. Then in 1999, I was asked to perform a solo story version in honor of the 250th anniversary of Goethe’s birth, for the Anthroposophical Society in New York. I’ve been performing it fairly often ever since. It has gone farther and affected far more people than I had ever expected.

What emotive responses do you expect from the audience?
This story touches something deep in us about what it means to be human in the face of evil.

What’s the last thing you do before you step out on stage / the curtain goes up?
Make sure my fly is zipped. Then as I begin, I have a moment to think of the people who guided me to this story, including J. W. von Goethe himself.

You’ve got 20 seconds to sell your play in the streets of New York, what would you say?
This is one of the greatest works of world literature. I’ve condensed it into 90 minutes. I’ve been performing it for 20 years all over North America and Europe. It’s won two awards off Broadway. And I would love to share it with you, whoever you are. 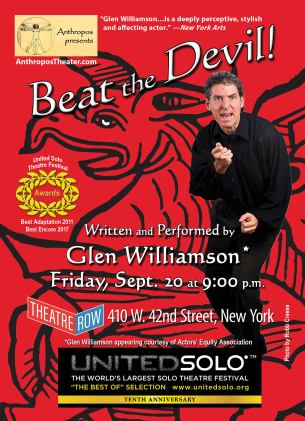 Posted on September 3, 2019, in USA. Bookmark the permalink. Leave a comment.