An Interview with Inescapable

Hello Vanessa, first things first, where are you both from & where are you at, geographically speaking?
Vanessa: I’m from Ontario, Martin is from Brooklyn, NY, and Jon is from many, many places in Canada.

Hello Martin, so when did you first develop a passion for theatre?
Martin: My British great-grandparents toured America as actors in a theatre troupe. Their daughter then went to the Royal Academy of Dramatic Arts, and then HER daughter (my mother) went to SUNY Purchase in New York for acting. I myself have an MFA in playwriting from Columbia University. All which is to say, it seems the passion for theatre is in my very DNA.

You two have just had a baby girl, hows that going will she be coming to Vancouver too?
Vanessa: Martin and I are very fortunate that we can travel and perform together – a real balancing act, as you can imagine. Our baby is 15-months-old now and it’s already her second summer on tour. Luckily, she’s a pretty easy-going baby who loves being out and mingling with other people. There’s no real model for how this is supposed to work and so we’re just figuring it out as we go. There’s a great network of traveling artists and supportive locals without whom this would be SO MUCH MORE difficult – if not impossible. But having a baby on tour has led to all sorts of beautiful moments with strangers and friends. After ten years of traveling without a baby, it’s a refreshing way to reengage with the fringe world.

Can you tell us about your training?
Vanessa: I’ve been acting since as long as I can remember. All my training has been hands-on, as I’ve been in countless productions in every capacity imaginable, both on and off-stage.

What for you makes a good piece of theatre?
Martin: I want every show I make to feel like an Experience. Capital E. I want people to be lifted out of their every day world. It’s what I’m looking for when I attend a piece of theatre. A visceral experience that transcends the reality of simply sitting in a dark room with other people.

In a world where you can get entertainment ‘on demand’, what makes theatre special?
Vanessa: Theatre remains the one form of entertainment that you cannot get ‘on demand.’ It happens in a specific time and place and if you’re not in the room for it, then it’s gone forever. The theatrical space exists in the same space in which we exist; time passes the same on stage as it does in the audience. It is as three-dimensional as we are. The actors are breathing the same air as the audience; they are feeling the same energy. When theatre works, it is unlike any other experience in its immediacy. It’s a shared experience with other people both on and off-stage, all of whom are together buying into an alternate reality that both reflects and reveals our own. 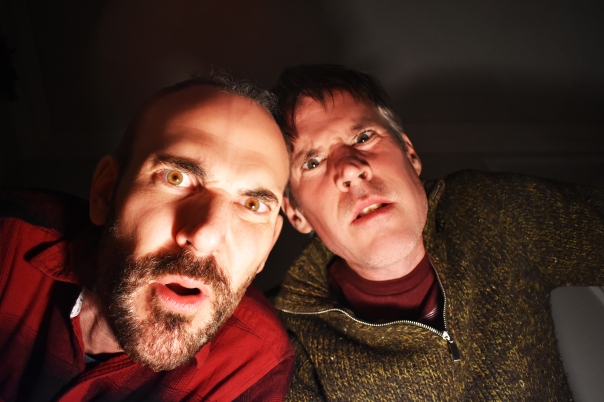 Can you tell us about RibbitRePublic and ConcreteDrops, & of their merger?
Martin: RibbitRePublic has consistently been making work for the fringe since the 1990’s, if you can believe it. ConcreteDrops has been doing likewise every year for over ten years. Safe to say, we’re all pretty committed at this point. When you join forces with another group, you want to make sure they’re going to be around for a while, so that the show itself can have a good, long life. Also, we like each other – so why not do a project together?

You’re bringing a play to this year’s Vancouver Fringe, can you tell us about it?
Martin: Like an episode of The Twilight Zone as conceived by M.C. Escher and written by Samuel Beckett, Inescapable is a fast-moving comedic thriller that plays with both our sense of time and identity. When two old friends find themselves trapped at an annual holiday party, a lifetime of secrets and betrayals are exposed just as quickly as the duo’s inability to remember them.

So Vanessa, as the play’s director, what are you bringing to the table?
Vanessa: Well, hopefully, I’m bringing what every director brings to the table, so to speak: an eye towards telling a story clearly. Not so easy in the case of Inescapable. With its inherently cyclical nature, it would be easy for the larger picture to get muddled and lost. And so my job, I feel, is to maintain a clear through line within the eddies and whirlpools of action and intent, so that even as the characters find themselves trapped in an ever-repeating moment, there is a rising momentum towards a clear climactic finale. 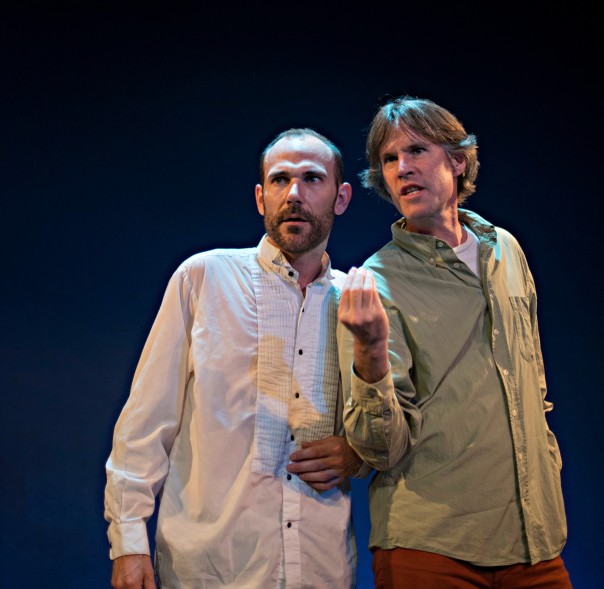 Where & when did you first get the inspiration for Inescapable?
Martin: After Paterson made the suggestion that we should do something together, I spent a few days mumbling to myself while walking around Bellingham, where I was performing at the time. The show just sort of came out, pretty much fully formed. If you see it, you’ll see just how bonkers this must’ve made me seem – mumbling this intense dialogue to myself while inadvertently weirding out Bellingham in the process.

Can you tell us about Jon Paterson, his role & how he is doing so far?
Vanessa: Jon is great to work with. Always game for trying things out. Rehearsals have always been super fun. As an actor he is capable of a wide range, from a sort of goofy amiability to something unhinged and menacing, both of which make him perfect for his role in Inescapable.

Inescapable won Best Script at the Orlando Fringe & Best-of-Fest at Minnesota… does that bring you any validation?
Martin: Well, yes, of course, it’s always validating to win an award or two – how could it not be? But more so has been the reaction of the audience as they are experiencing the show. It’s quite a theatrical ride, I think. 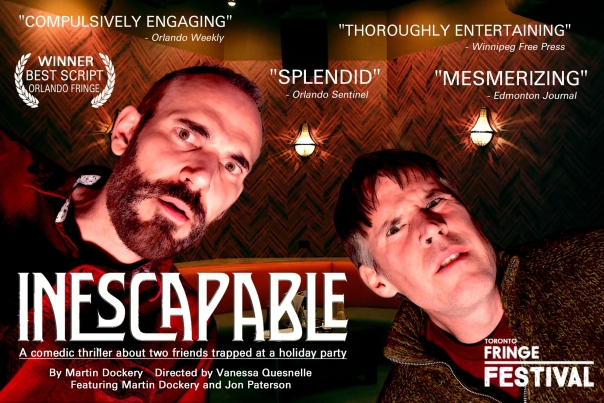 What was the biggest obstacle you overcame while putting the play together?
Vanessa: Well, the biggest obstacle has been the fact that Jon lives in Liverpool, Nova Scotia, while we live in Brooklyn, NY. And so rehearsal itself has been a creative affair. Luckily we’re at many fringe festivals together and so we’re able to put some time aside. At this point, though, we’ve been doing the play for a number of years – it’s in our bones and not much more than a refresher rehearsal is needed.

You’ve got 20 seconds to sell the play to somebody in the streets of Vancouver…
Martin: Do you like the Twilight Zone? Black Mirror? Puzzles? High energy, mind-bending, comedic thrillers? Well, then, I dare say you’ll love Inescapable. 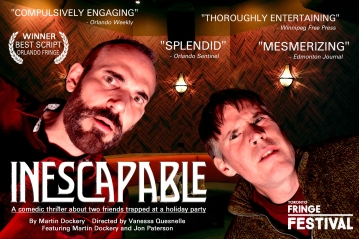