Only Fools the Cushty Dining Experience 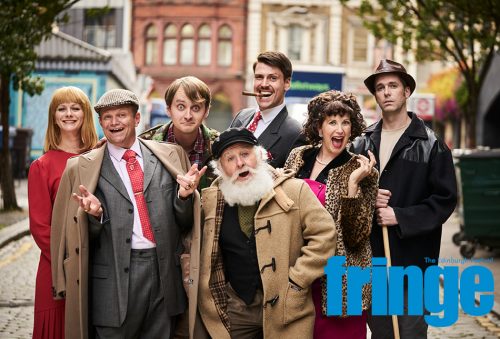 Well here we go again! This was my first review of the festival and I had high hopes. My girlfriend was keen on seeing the Faulty Towers experience, but I couldn’t get tickets, I was reliably informed that the Cushty version was as good if not better! This was going to be Cassi’s first show, so I was super excited for her and really hoped it would be great! In fact it was phenomenal – one of the best shows I have ever seen! From the moment we walked into the bar at the hotel the fun started! I noticed this rather out of place woman in a mack trying to engage with a couple who were sitting by the toilets. I twigged straight away it was Cassandra (Rodney’s) not mine, played by Kat Mary who also doubled as an amazing Marlene! I gave her a bit of chat but she wasn’t really biting and continued to engage the couple.

As me and Cassi went through into the bar there was another odd fellow in a black mack looking at me rather suspiciously. I get a few looks for being a bit of a giant, and normally people look away quickly, but this dude was wanting to engage – so the game was afoot! This turned out to be Slater, who also trebled as Trigger and Boycie, who instantly had us giggling before we had even managed to grab a drink. The guy was off the charts, and dare I say my favourite, if there is such a thing with such a quality cast! Then the fun really started as Del boy (Nick Moon) burst into the bar and tried to flog us all hooky watches from his case, followed by Rodney (Lawrence Watling) in snorkel and flippers! Such a great start – could this get any better?

Hell yeah! The full thing from start to finish was an absolute riot! The theme was a pub quiz with a meal chucked in! Please don’t expect too much from the food – it isn’t supposed to be that good no matter how posh the hotel is – it’s a pub quiz after all & it’s supposed to be pub grub! Anyway, we weren’t there for the food, we were there for the giggles – and we had a barrel load of them! Every one of the actors nailed their parts and stayed in character from start to finish. These guys were on point with every mannerism being perfectly nailed, and the show flowed effortlessly and without fault. I could not actually believe we were in there for over 2 hours, it was so good the evening just flew by as we were entertained and mesmerised by the actors and their show!

Undoubtedly, one of the best things I have ever seen; so, so real – as if you were actually with the Trotters as they got up to one of their capers. They had great audience participation, with my Cassi being brave enough to get up and become part of the show. Well done guys, I have been a lifelong fan of Only Fools and Horses and you absolutely smashed it! I could not have asked for a better start to the festival or for a better way to impress my girlfriend – 5 stars out of 5 and a pure 10 out of 10 – thank you Imagination Workshop!