The Fringe is here! I woke up on the morning of the 31st July 2019 as eager as the day on which I was to receive my first kiss. In the Edinburgh Festival season; East meets West, Song meets Dance, Black meets White & of course Art meets Writing. The latter is the Mumble’s contribution & we love it! Our first show was Doodle Pop from Korea, which began at 10.50 in the morning. Waiting in the audience were quite young children & their smiling parents, some of whom were returning after experiencing it last year. ‘Its one of the few shows you can sit through without being in agony,’ said one young mother, ‘& the kids loved it!’ 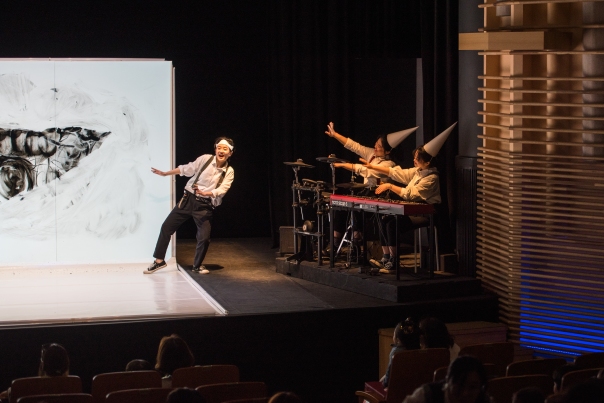 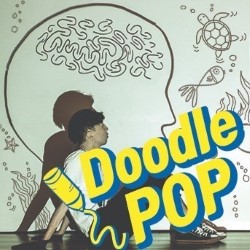 The overall effect of Doodle Pop reminded me of The Beatles, when the whole is far better than its constituent parts. We are given a blend of space, sound & images, concocted by an electric drumkit, a keyboard, a binary projector show of light & dark, & two ‘actors’ wielding markerpens like light sabres. These together are pretty basic on their own, but combine into quite a spell-binding experience. Like the jamming of a dead good jazz band. The finale is also something straight from the uncorking of a bottle with jinn in it; that is a genie jinn, not the drinkable gin – but there is defintitely a sense of drunken-ness to the proceedings; in a good way tho’, the perfectly silly way which is infectiously impossible to ignore.

The cast is young, & talented, & together create simple story structures & arcs to please the little ones, burnished with an image here, a sound there, a puppet at the side & an animation bouncing across the snow-white screen. Of the latter, the variant game of ‘Pong’ was sublime, while the ‘on-off’ battle was chaplainesque. The two actors – actresses actually – are perfectly well-trained in vocal & facial accompaniments to their craft, while holding a superb torch to interacting with the kids, smashing through inhibitions with effortless demeanors. A perfect show for the kids this Fringe, about the age range of 2-7 – 8 at a push – but for we adults it is also an extremely enjoyable experience.