An Interview with Lottie Walker

Hello Lottie, first things first, where are you from & where are you at, geographically speaking?
I’m originally from the East End of London. Home is now South West London, but I’ve lived all over the country – I’m a bit of a nomad.

When did you first realise you were theatrical?
When I tried to slide up the banisters after seeing Mary Poppins at the age of 5. My parents had to endure many “concerts” from behind the dining room curtains 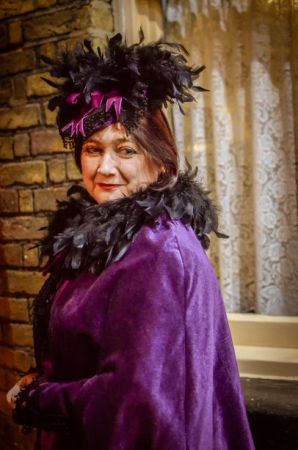 Your first love, it seems, is Music Hall – what is it about variety that makes you tick?
Family folklore says that my great grandmother was “on the halls” in the late 19th century, so it is apparently in my genes. However, this could be an urban myth as no-one seems to have any solid evidence or know her stage name. It’s a nice story, though and one day when I have time I’ll do some proper research and see what I can find. I would love to sing one of her songs if she had a signature tune (if she existed!). On a more practical level, my first professional job was a six month summer season doing Music Hall in Blackpool. I learned so much during that 6 months both about performing and also about the heritage of our variety tradition. I am a member of the Grand Order of Lady Ratlings, too and the organisation is full of proper variety “turns” with some wonderful stories of theatre-land past.

In a world where you can get entertainment ‘on demand’, what makes theatre special?
It’s dangerous – no retakes, no airbrushing, just the show and performer doing what they do and hoping their audience go away happy. Theatre – especially in the smaller Fringe venues is so much more personal and offers the opportunity for performers and audience to engage with each other. Each performance is different in theatre. One can see the same show several times and have a slightly different experience at each one. On demand entertainment is a wonderful thing (I’d be lost without the BBC iPlayer) but it’s never an “event”

You’ve got three famous actresses from history coming round for dinner. Who would they be & what would you cook; starters, mains & dessert?
Sarah Bernhardt, Maggie Smith and – of course – Nelly Power! What I’d like to cook and what my limited culinary skills will let me get away with are quite different. And anyway, the conversation would be so interesting I think the food would take a back seat. So, my VIP guests would get what all my friends are bored to tears of:
Starter: Goats cheese & fig salad
Main: Poached Salmon with boiled Jersey Royal potatoes & Asparagus (summer) or Leg of Lamb with root veg cooked in red wine & mashes spuds (winter)
Dessert: Cheeseboard with lots of fresh fruit

Can you describe your working relationship with Steve Taylor in a single sentence?
We’re a good team; Steve makes me focus on the essential practical stuff when I get distracted by the peripherals – and we laugh a lot!

Can you tell us about Blue Fire Theatre Company?
We’re a tiny company formed just 18 months ago. Our focus is on performing plays (both new and established) about our theatrical heritage. The state school system is no longer supporting the arts at all and we are trying to introduce younger generations to the theatre of the past by making the characters accessible. It is a happy coincidence that both plays we are bringing to the Fringe this year cast very famous people (MArie Lloyd and Shakespeare) in supporting roles whilst we tell the stories of their lesser-known contemporaries. Blue Fire is independent and self-funded so often have to be very creative in our approach. Touring with literally one trunk and a cushion makes us very low maintenance and also means that as performers we have nowhere to hide!

You’re performing at this year’s Edinburgh Fringe, can you tell us about the play?
Marie Lloyd Stole My Life is a piece of new writing by J.J. Leppink. It is essentially a monologue punctuated by well known music hall songs. Nelly tells of her own life in theatre from the dizzy heights of topping the bill at the Theatre Royal Drury Lane to the sad moment her most famous song was performed by a younger singer, Marie Lloyd who went on to become much more famous and well-remembered. Along the way we learn of sea-rescues, divorce, jewellery theft and the ups and downs of life upon the wicked stage. Nelly was a strong and feisty woman and so is J.J. Leppink, who has woven in the social history of the suffragist movement to the play and also conveys the submersive element of Music Hall in Nelly’s dialogue. I view the play as Nelly’s own private Victorian Melodrama; I think she’d have liked that.

Where, when & how did the idea for Marie Lloyd Stole My Life originate?
I trained as a tour guide for Clerkenwell & Islington in London last year and one of my projects during the course was to do a 10 minute presentation on any subject at all as long as it was in the area. I chose to speak about Marie Lloyd and even got the class and tutors singing along at the end! One of the stories I discovered in my research was that the song “The Boy I Love is Up in the Gallery” was originally performed by Nelly Power (who I’d never heard of) and stolen by a 15 year old Ms Lloyd who made her name with it and was a superstar within the year. I wanted to find out more about Nelly – and the rest is history! Lots of people have got behind the idea and I’ve had friends do independent research just for fun, That andthe support of the British Music Hall Society has made the whole process quite special.

You are also playing Nelly Power on the streets of London – what is the back story?
Islington (where I’m a guide) was the home of several of London’s music halls, including the famous Collins Music Hall (now Waterstones) which is still standing with the original facade. I always intended to create a themed walk about the subject and the idea of doing so as Nelly was just irresistible. As a happy coincidence the Islington Museum are running a Music Hall exhibition this summer and I’ve been able to tie in with them, which is really exciting.

You’ve got 20 seconds to sell the play to somebody in the streets of Edinburgh, what would you say?
Come and see my show! It’s a one woman Victorian Eastenders with a sing song thrown in for good measure!

The Space on the Mile