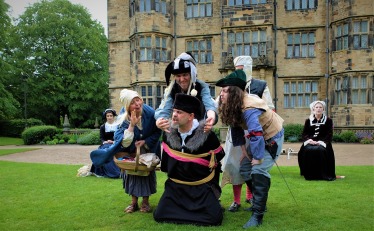 Camped out on a picnic blanket in my waterproofs, within seconds I forgot all about the weather and was fully immersed in a new comedy by Doodlebugs Productions , Steve Cooper’s Twits Wits and Bawdy Baskets. Set right outside Gawthorpe Hall in an open park, we follow a group of “hapless Elizabethan rouges” on their attempt to be a company of strolling players, hopefully grabbing a good bed and grub on their way.

Tom is an eccentric cross-dresser, who claims all parts of the fair lady. Harry, the boisterous confident leading man. has a secret. Merry John is the joker who glues them all together and Sloppy Jen, well, she’s just there for the ride. The only thing standing in their way (other than characters’ apparent lack of talent) is Reverend Shuttleworth, a firm believer that these so-called plays are created by nothing but beggars. After leaving the Reverend tied in an attempt to escape his preaching, the rogues are on the run! 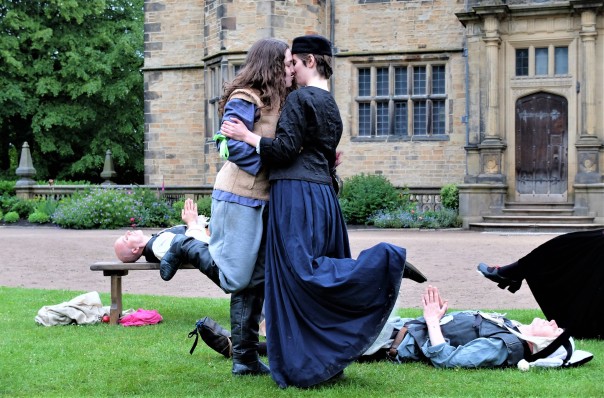 On the other side of things, we had our very own Anne Shuttleworth of Gawthorpe Hall, lost in her own world of reading and writing her own plays, while constantly battling her Mother for her right to marry for love.. Upon the news of her father’s death in London, we discover that Anne’s cousin, the Reverend Shuttleworth, is on his way to claim the Hall which is rightfully his. When the two groups collide, hilarity ensues & the piece provided the perfect combination of a superb cast, acapella singing and quick-witted humour to keep us warm on a rainy Lancashire afternoon! What’s not to love?

Posted on June 12, 2019, in England. Bookmark the permalink. Leave a comment.