For Oran Mor’s offering this week, the set had a somewhat clinical feel with panels covering the back of the stage and a gap that would act as a door. There was a table with two dark seats and a mug on the table. As the play began, large magazines were projected on the panels. To the sound of rap music we saw Elaine C Smith and Joy Mcavoy join each other already deep in conversation. Smith was reprising the character of Ida, a part she first played in 2006 when Denise Mina’s play was first produced at Oran Mor to great critical acclaim. 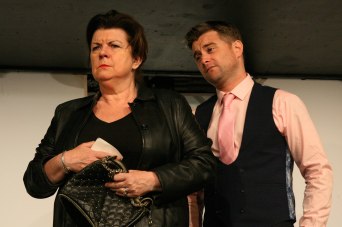 We got the measure of the two women straight away by the contrast in their attire, the middle aged Ida in her less expensive clothes compared with journalist Helen (Macavoy) in her plush business suit. Helen was chasing the story of Ida’s daughter Mary, victim of an overdose. In their conversation it turned out that Mary was dead, wasn’t dead, was dead again, becoming a farcical exchange between them and greatly frustrating Helen as she has became emotionally invested in the Mary situation. Every time the journalist felt she was making progress Ida shuts off and gave out her usual banter to get out of talking about the unbearable details.

Gradually the truth emerged and we realised that Ida’s humour was her way of trying to deal with the great grief of losing her daughter to drugs. Helen seemed to want nothing more than to represent Ida in telling her story, indeed she became quite passionate about that. But Ida remained aloof, never quite trusting this journalist who she felt was really only looking for a good story to boost her own career. In fact at one point Ida was so full of distrust and paranoia that she clasped her hands around the journalist’s throat, nearly strangling her. And it would be a good story because Ida had turned her back on a life as the wife of gangland drugs boss and was bringing up her lost daughter’s children on her own. 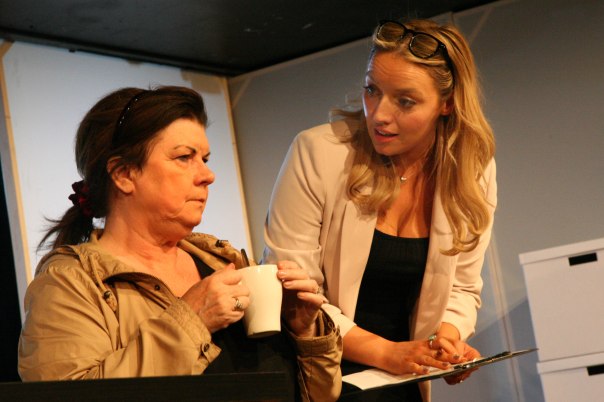 With a nifty change of scene (worthy of larger and longer productions), we were introduced to the character Fletcher (Paul James Corrigan) who it turned out was a rival drugs lord, and the person who got involved with Mary and got her into drugs in the first place. He was planning to move to Cyprus and wanted to take his son, Mary’s child, with him. He demanded that Ida allow him to do so, threatening violence if she didn’t. We saw all of Ida’s inner turmoil as she struggled to find the strength to assimilate yet another body blow made by this unreasonable man, who was already in reality the villain of the piece.

The play concluded with Ida sitting at Helen’s desk with the journalist frantically writing away. Ida had already lost so much, has had to dig deep into her inner reserves of courage and resilience in order to survive, but in the end we are left with a poignant vision of a heroic Glasgow woman who despite having lost so much, found the courage to acknowledge all that had happened and agreed to make her story public.

Posted on June 11, 2019, in Scotland. Bookmark the permalink. Leave a comment.