Kai Fischer’s Perth Theatre production of Patrick Hamilton’s 1938 melodrama serves us a reminder that mental abuse in marriage is not a new phenomenon. In the psychologically claustrophobic setting of a Victorian era parlour, we watch husband Jack Manningham assert brutal control over wife Bella, who’s mind is crumbling under his suffocating and sustained attempt to undermine the foundations of her sanity. Bella appears to lose trivial everyday objects, bills, jewellery and has begun hiding things around the house. This infuriates Jack, who, near the end of his tether, has threatened Bella with the asylum if she doesn’t stop. But Bella can’t stop and what’s worse, when Jack goes out at night she has begun to hear strange noises coming from the unoccupied rooms upstairs and the gas lights dim eerily only to brighten when he comes home. She’s lost control.

Esme Bayley plays a suffering Bella with an air of hand-wringing paralysis. At times she stands, ghostlike, at the side of the stage and comments on the action of her husband, as he toys with the churlish maid, Nancy, played by Ruby Richardson, and it seems like she’s resigned herself to incipient insanity. That is, until Rough, a retired policeman enters out of the smoggy London evening to turn her life around. He’s been watching the comings and goings of the house for some time and knows about Jack’s attempts to derange Bella. Meg Fraser’s Rough is a breath of fresh air into the stifling gloom of the Victorian parlour, infusing spirit into Bella and the resolve to reclaim her sanity. Having the ageing constable played by a woman works wonderfully, suggesting that in the face of abuse like this, it’s women who must confront abusive male greed and coercive power with the liberating truth, concern and right. 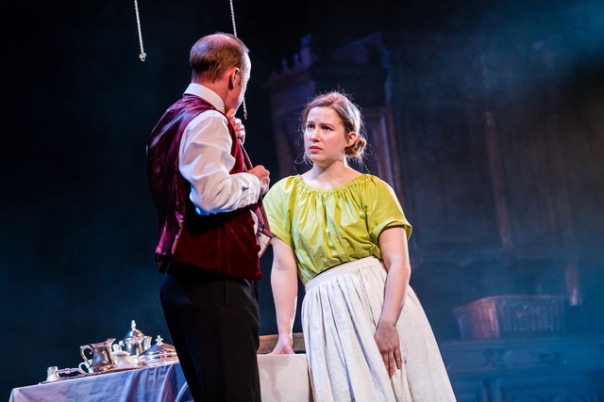 With Bella’s dawning realisation, Jack’s true nature is uncovered. Robin Laing portrays a thoroughly cold and cunning Jack, who treats everything as his to be used. A snake in a suit, he’s outwardly respectable and charming but oozes corruption self-interest and greed. I’ve not enjoyed disliking a character so much in ages. Needless to say, the ending of Gaslight is not a little satisfying. It’s an interesting thought that laws recognising emotional coercion or “gaslighting” (yes, that’s where it gets the name) as a crime only came into effect recently. Yet the behaviour, clearly, is not new. Gaslight left me wondering just what does go on behind ordinary everyday closed doors, when the curtains go down and the lights get lit.

Posted on March 26, 2019, in Scotland. Bookmark the permalink. Leave a comment.