← An Interview with Kate Joyner
Gaslight →

Oran Mor’s Pie, Pint and Play never fail to entertain and this week’s offering was no exception. The set had an arty feel about it with a stained glass window, some grimy London underground style tiling, a green couch and a piano to one side. Chic Murray: Funny Place for a Window is Stuart Hepburn’s affectionate musical tribute to the well loved comedian whose career took him from engineering all the way to sell out concerts at the London Palladium. This three-hander first appeared at this venue in 2018 and I welcomed its return as part the special year when Oran Mor celebrates 500 productions.

From the moment when Chic (Dave Anderson) comes onstage and declares, in typical Chic fashion, “funny place for a window” the quips are continuous and the audience helpless with laughter. Chic and his wife Maidie (Maureen Carr) were reminiscing, together with various other characters played by Brian James O’Sullivan. 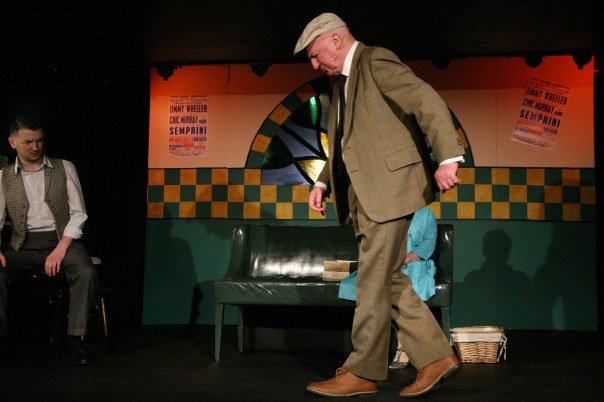 The music tied up the action in the same clever way that the play itself was written, moving easily from dialogue to music numbers with the piano and an accordion. Maidie seems happy enough as she reminisced on the high points in Chic’s life and had a loving attitude to his failures but in the end she had had enough and left him before his untimely death in 1985. In his life, Chic had found a loving wife with whom he shared his sense of humour and wit. She always found him endearing, even when her cajoling was met with comedy and humour, which seems to be Chic’s larger than life response to everything.

The three performers come together as thick as thieves, engaging the audience completely and accompanied by roaring laughter and applause as we lapped up the jokes that came at us thick and fast. But the writing goes well beyond the bounds of comedy, instead writing as if Chic himself were somehow brought to life again after his death that was announced in the final scene and all became clear when the loose ends were tied up through the simple biographical dialogue of the life of this man.

As we come to the end of this vibrant production, we pity Chic his fate and wonder whether his smiles were real or some kind of defence mechanism. But I suppose that’s the punchline he took to his grave with him, leaving us with a legacy of side-splitting comedy that will never fail to raise a laugh.

Posted on March 26, 2019, in Scotland. Bookmark the permalink. Leave a comment.

← An Interview with Kate Joyner
Gaslight →