Nora: A Doll’s House is Steph Smith’s new and radical re-working of Ibsen’s classic drama, which caused outrage when it was first performed in 1879, with the critics pronouncing it immoral, which was perhaps the response Ibsen wanted. In this version, produced at the Tramway by the Citizens Theatre, the role of Nora is shared by three different actors (Maryam Hamidi, Anne Russell-Martin and Molly Vevers), portraying the character in three different time periods.

Tramway’s multi-dimensional set served to indicate the varying time zones, and also, with its closeness to the audience, to suggest the stifling nature of Nora’s environment and the male dominated world which traps her. As the play begins, on the surface all seems well with the family, with Christmas coming up and a few quid in husband Thomas (Tim Barrow)’s pocket. Things may be looking up as he’s been promoted. But there is an air of sadness about Nora, and a hint of controlling from Thomas, so slight that we are inclined at first to let it go. But we see Nora distracted and nervous; it is painfully obvious that her mind is fragile and desperate. Her musical theme, which recurs throughout the piece, is one of melancholy. 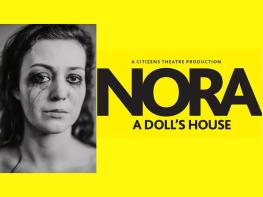 In despair, Nora strives to understand her pain and to find her own lost self through her tortured dialogues with the different manifestations of herself, and with her friends. One is Christine, who she is cautious of meeting, for to complain seemed like a betrayal. And then there’s Daniel, who sees through all the pain to the façade of her marriage, and tells her that she is worthy of love, and worth more than just to be an ornament in the home and subservient to a husband whose attitude is less than savoury. Nora’s point of view becomes more and more clear and we become increasingly frustrated at the restricting predicament that this world seemed to offer her. Such is the multi layered intention in the re-writing of Ibsen’s play that we cannot escape the realisation, when the three periods come together, that this is the struggle women have faced over far too many years.

But with the introduction of an incriminating document, the already fragile Nora comes under the threat of blackmail from Nathan, a former employee of her husband’s. Her persistent fears come to the fore and this seems like the final straw that will destroy her. So low is she brought that she imagines drowning herself in a nearby river and taking her children with her. It’s not clear whether it’s because of the damning document, evidence of a fraud she committed when in desperate dire straits, or her own unfathomable pain which she can never shake off.

In the end Nathan tears up the document, but not before Thomas finds out and almost strangles his wife. Only then does he realise his love for her and begs her forgiveness. But it’s too late, there’s no way out for them. As the stage darkens we are left with an overwhelming feeling of sadness and the idea that maybe we’ve not made as much progress in the last 100 years as we would like to think.

Posted on March 22, 2019, in Scotland. Bookmark the permalink. Leave a comment.