← An Interview with Agent November
Nora: A Doll’s House →

I returned to the Chandler Studios at the RCS to see a performance of Doctor Faustus, Christopher Marlowe’s famous Elizabethan tragedy, adapted and directed by Jennifer Dick for a modern-dress version by students of the RCS’s MA in Classical and Contemporary Text. Sparse props and a backdrop consisting of a huge torn piece of fabric set the scene for the tragedy to come. 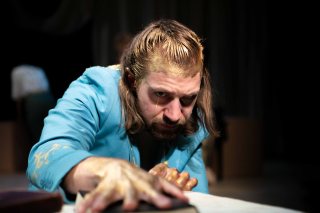 The drama begins with one, then two, then a whole entourage of characters invading the stage to set about the terrible damnation of the unfortunate Doctor Faustus. Faustus, a revered astrologer, was persuaded (or does he choose?) to sell his soul to the devil for the sake of a life of power and excess. His scholarly nature is emphasised by his books which feature prominently as a device in the plot, as he argues with the scene-stealing fallen angels, quoting passages from his tomes while they dance and cavort around him. Then comes the thrilling – and chilling – moment when Faustus makes the famous declaration:

“Go bear these tidings to great Lucifer: / Say I surrender up to him my soul,
So he will spare me four and twenty years, / Letting me live in all voluptuousness;
Having thee ever to attend on me; / To give me whatsoever I shall ask.”

Words which still have the same terrifying power as they did five hundred years ago when they were first written, showing that the glory of a play can and does last for hundreds and hundreds of years and still blow the competition away. But Faustus was not alone with the fallen angels from hell. Present too are heavenly angels in amazing Flash Gordon style outfits, who, in their patient way try to persuade the scholar not to choose eternal damnation, coming to blows with their evil counterparts as they tussle for the man’s soul. The contrast between the groups was vast, the good angels quiet and dignified, the fallen ones giving us a glimpse of hell as they exclaim with glee to be returning to their sacred father Lucifer, touching themselves and writhing in a glorious hypnotic display of badness.

Faustus meets the great Lucifer, his presence signified by billows of smoke and the darkening of the room to a deep red, his words expressed through the unison of voices of the closely bonded fallen angels. Faustus proclaims his fear, tries to reason with the presence, to find an argument in his books. But his pleas are ignored – the deal for his soul has already been done. As Faustus’ desires begin to be fulfilled,a he starts to inhabit his new role as emperor and exercises his new found power, mocking the pope and granting wishes to whosoever he pleases. Finally, we are drawn into his emotional turmoil as he inevitably realises his position at the very gates of hell and to his horror is dragged off to the torments of fire and eternal terrifying torture. We weep for his loss and for the heavenly angels who could not save him from his damnation.

This performance can only be described as a marvellous celebration of the dramatic arts presented with great creative ability – glorious words, huge themes, mesmerising choreography, stage movement and scene setting; it is hypnotising in its powers and force. Don’t think twice, just go!

Posted on March 21, 2019, in Scotland. Bookmark the permalink. Leave a comment.

← An Interview with Agent November
Nora: A Doll’s House →