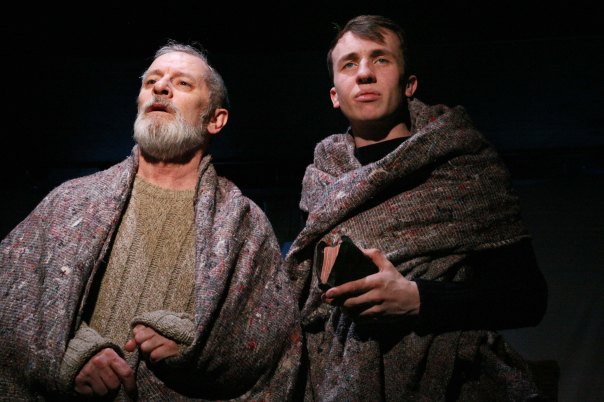 Walking into the Oran Mor venue, we saw the stage dressed as a humble room with laundry hung up to dry and a very comfortable looking chair. The Scurvy Ridden Whale Men by Steven Dick tells of a 19th century whaling disaster, a tale of tragedy and the loss of the crew of the Viewforth to the icy sea, starvation and scurvy. Mrs Humphrey (Janette Foggo) was a larger than life character in brown brogues who presided over the temporary hospital set up in her home to tend to the only two survivors She settled herself down to tell the grizzly tale with gusto and black – very black – humour.

First up is young Peter (Ronan Doyle), flying high on his own emotions. Mrs Humphry keeps trying to bring him down to earth and bring him to his senses, but those senses have been heightened by the tragedy of the boat that sank at sea. Her words of common sense contrast with his excited dialogue and increasing fixation with the need to find his bible, which has been misplaced. She tries to get him to focus on his need to be looked after, shows him his laundry which has been attended to. As she peels her vegetables, we see a darker side to her as she speaks about the loss of her own two boys, Robert and Donald, whose boat it was that had been lost at sea.

When the black storm that caused the tragedy was mentioned, the room dramatically darkened and a howling gale blew through the PA system. Captain Reid (Billy Mac) is depicted at the at the helm during the terrible storm that killed all but himself and the traumatised youngster. The contrast between the safe warm house and the terrible sea scape served to underline the tragedy that had befallen these characters. It was almost as if they were in different dimensions that were tearing them apart as things go from bad to worse. Captain Reid was increasingly riddled with guilt and young Peter was more and more obsessed with the need to find his bible, for that was his only means of salvation. He becomes more and more sure that Mrs Humphrey had taken it and had hidden it away.

He became further convinced that she had plotted from the outset to get the two fisherman to stay with her in her hospital and becomes more and more fervent in his insistence. Things come to head when Peter pulls a knife on her, a seemingly outrageous act, but one that brings about something of a reversal in the story and we start to suspect that his suspicions might have had some truth in them after all when she mutters that she was never trying to hurt anyone, what has she done? We were left wondering whether her act of kindness might have a different, darker motivation, perhaps something to do with the loss of her two sons? We just don’t know.

Posted on March 19, 2019, in Scotland. Bookmark the permalink. Leave a comment.