The Witch of Edmonton

The atmosphere in the Royal Conservatoire’s Chandler Studio Theatre was dark and murky as we took our seats, set up in a double row on three sides of the stage. The set itself added further intrigue as out of the smoky darkness arose two great hinged planks of wood suspended from the ceiling. There was just time for one more cough in the audience before we settled down to enjoy, at close range, the performance of The Witch of Edmonton, written in 1621 by William Rowley, Thomas Dekker and John Ford and based, it seems, on real life events that had happened earlier that year. This adaptation is by Mark Silverschatz.

We witness a town meeting in which all sorts of townsfolk take part – a real crowd scene, with the characters, both rich and poor, comfortably attired and seeming to be happy with their lot in life. Cheerful uproar ensues as plans for the further development of Edmonton are approved. But this blissful state does not last for long: with each subsequent town meeting and encounter the subjects become more and more disruptive and disingenuous as it becomes clear that everyone is really only thinking of themselves and nothing else, even to the extent of cold blooded murder. 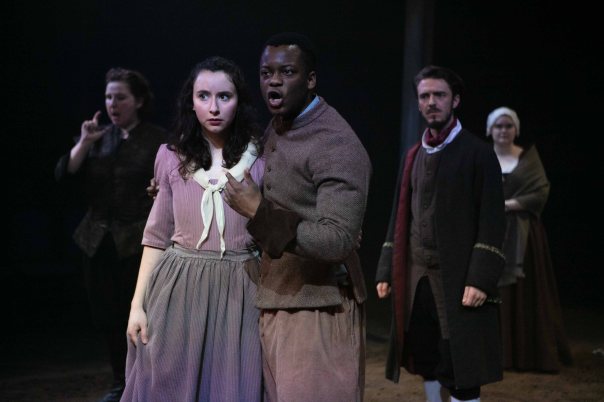 We start to see the true nature of the town when the haggard figure of a woman, Mother Sawyer, crawls on to the scene, totally distraught after being accused of witchcraft by the townsfolk. A terrible judgement that would reap terrible outcomes for all involved. Especially when a new character, a black dog called Tom leaps on stage, crouching behind the accused woman and offering her the revenge she so badly desires after her unfair treatment by the town. In order to reap this revenge, she makes a bargain with the devil, for that is the true identity of the dog.

Then follows a complicated intertwining web of subplots involving various characters; starting with love, bigamy and treachery, and progressing to murder and the way the devious mind can work to avoid being captured. At every turn, the devil dog Tom is always there, lurking and manipulating everything, unknown to the protagonists who cannot see very far beyond themselves; a source for great frustration and a genius opportunity for crowd participation. 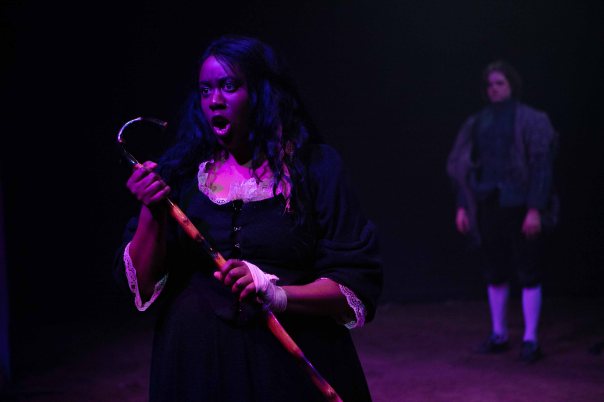 The play casts a spotlight upon human weakness, whether prompted by the devil or not. It does not shy away from grim and graphic confessions of sensuality, rape and cruelty. Love tries to hold out with a wistful dialogue between earth and heaven, but it is as if the world beneath them is shaking like a vision of hell. We are drawn into the tragedy, held together by fragments of speech between the many and the few. At one point, in mourning, they huddle cross legged in the freezing cold, only to be woken again by further grief.

The devil must be paid and leaves only tragedy in her wake; the ‘witch’ who seems no better off than when she started and a population that seems only good for servitude and slavery. The play grabs you by the proverbials and doesn’t let go until it is finished with you, a feeling enhanced by your proximity to the action. Strong stuff!

Posted on March 8, 2019, in Scotland. Bookmark the permalink. Leave a comment.