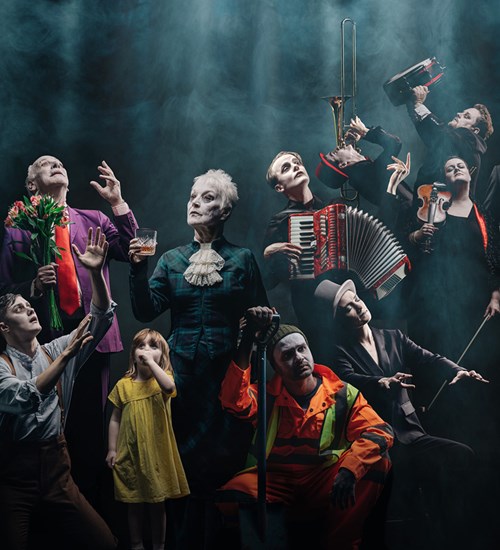 The Tramway is one of coolest theatrical venues – a hanger of a space, which retains an excellent sense of intimacy. I was looking forward to watching The Dark Carnival there, a co-production between The Citizens Theatre & the Dundee Rep. It certainly looks fantastic, & sounds completely amazing thanks to the ethereal voice of band-leader Biff Smith. But substance-wise there’s a major flaw.

Writer Matthew Lenton chose to put most of the script into not very good verse, in fact towards the end he admitted through the mouth of one of his characters it was doggerel. So you have a bunch of talented actors chained by having to deliver weak verse, completely restraining their ability to perform. Natalie McCleary, an angel, did employ her lines with a certain rhapsodic quality – I suspect she’s a poet herself – but the others, like I said, were unfortunately held captive by this still-born script. Apart from when we heard ‘Lazarus’ rhyming with ‘hazardous’ – that was quite clever.

So what is the Dark Carnival – well imagine the recent marvellous animated Coco film about the colourful afterlife of the Mexicans. Well, this is a bit like that, but a bit less lively, a lot more morose & a tad more burlesque. The idea is we are all Necropolitans in the waiting room for Dis, our Sibyl being the chief narrator, Elicia Daly. The set is absolutely marvellous, with coffins stack’d higgledy-piggledy, around which the extensive band led by Biff Smith is draped. Above them all is a graveyard, detached & lucidly lit, in which the action of ‘The Still Living’ takes places, with some interaction with those downstairs.

At the final count, it just wasn’t that interesting, like a paddling pool for those who cannot handle a complex narrative. The Dark Carnival was definitely NOT Virgil, nor Dante, taking our psyches to the Underworld! As an immersive experience, however, it was actually quite good; a work of aesthetic beauty, while the addictive, scruffy-puppy music hit like a well-timed xanax to help push the 1 hour & 40 minutes to the finish.