A Respectable Widow Takes to Vulgarity

Glorious colours lit up the stage as we arrived at the Venue in the Oran Mor; it all looked very plush. This was the second production in Oran Mor’s celebration season, a welcome return of Douglas Maxwell’s hilarious one-act play, A Respectable Widow takes to Vulgarity, last seen here in 2013 and just as funny the second time around.

The two characters couldn’t have been more different – the well dressed, middle class Annabelle Love (Anne Kidd) and her endearing, if uncouth, counterpart, Jim Dick (Craig McLean). From the moment when the hapless Jim opens his mouth and utters his first swear word, the whole room was shaking with laughter at the sheer incongruousness of the conversation. Easy and effective comedy, and yet also an effective tool for the writer to examine the polar opposition of their lives.

A warmth grows between the pair as Jim’s guttural language reveals his origins and his outlook on life, and the widow strives to emulate him, in turn revealing truths about herself and her late husband’s origins. She finds the foul language somehow liberating and increasingly throws caution to the winds as she tells the young man her intimate secrets and discusses the meaning of the words being uttered, much to his astonishment – his face was a picture! But perhaps the point was that intimacy could grow between this unlikely pair of human beings even though there might at first seem to be no connection between them. 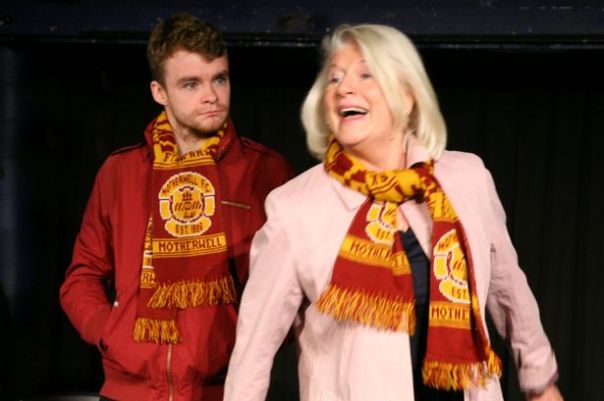 Make no mistake, the swear words made you blush, and yet the audience loved it and lapped it up. Annabelle Love (a dream of a name!) used them as an inquiry into life, pushing against its boundaries, finding a new freedom. Alongside her was the perfect protagonist who was able to explain relevance of the words as he also insisted upon using them. Their conversation became an insight into reality.

And as they screamed out expletives to the world, so their stories unfolded and their bonding grew. Annabelle expressing her hurt at the loss of her husband and Jim also reflecting on missing his dear father. There was something touching in the way the language brought them together to express their inner feelings, perhaps for the first time. Their moments of silence brought the room to a perfect hush.

You come away from this play feeling deeply moved and with a new interest in brushing away the barriers that separate us so that we can recognise our common humanity. Enthralling.

Posted on February 19, 2019, in Scotland. Bookmark the permalink. Leave a comment.