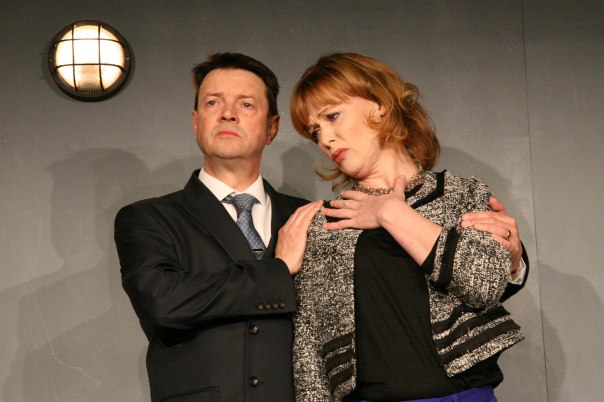 The house announcer waited for the crowd to hush before telling us that the Play, Pie and Pint at the Oran Mor, Glasgow, would soon be celebrating its 500th play. There was an air of excitement in the room, a plush, adaptable space, as, fed and watered, everyone readied themselves for the show, “Biscuit” to begin. The small stage space at the back was lit up and the action started with a well-dressed man and woman in conversation, and a third, male, figure lying on the floor. The three were in a panic room, with the assumption that something had gone very wrong in the world outside.

The dialogue soon had the audience roaring with laughter. The unconscious man comes to and turns out to be a Glaswegian, a cleaner employed by the Prime Minister, providing a comic contrast to the well spoken couple who are indeed the British Prime Minister and his wife. The conversation centres around the state of Britain today, swirling around in a 3-way dialogue. The Glaswegian’s perspective is that he didn’t vote, they make fun of him for it, he appeals to the audience and they bond with him, feeling that we all know what’s going on in our world today.

The characters discover – via a stray phone signal- that there has been a massive chemical attack in the outside world; terrifying news for the three stuck in the panic room. The PM starts to deteriorate while the other two find ways to stay calm, as if they know that things would somehow work out. The PM verbally attacks the Glaswegian cleaner in a sort of tantrum as he demands “could you negotiate an international trade deal?”  But for each thing he asks, the Glaswegian responds in kind until the frustrated PM is reduced to saying “you have an answer for everything.” As he tries to cut the conversation dead.

As the play progresses, the clothing worn by the characters starts to take on extra significance as we notice the suit worn by the well-to-do PM start to contrast more and more with the red t-shirt and red training shoes worn by the cleaner. The PM remarks that quality should outweigh fashion sense but the cleaner retorts that he simply “…likes his trainers.” The dialogue conveys to us a sense of growing tension with the PM showing his true colours in his fear of dying, heightened when the Glaswegian announces that he is in fact a terrorist.

The shocking turn-around leaves the PM cowering behind his wife, on his knees begging for his life. The wife betrays him, choosing the stronger character and we see the Glaswegian take command of the situation.  The arguments and commotion become ever more intense, typified by the exchange where the Glaswegian PMs suit “…cost more than a car.”, and the PM shows his true colours when he declares that it’s not about the cost of his suit, but about successfully “managing the rabble”.

Then with no warning, the door suddenly opens and the three escape together with a feeling that no one was any the wiser. And neither are we. If you have an hour to spare at lunchtime, come along to Oran Mor for a Play, a Pie and a Pint. You never know what you’re going to get, but it will certainly give you food for thought, as well as, well, food!

Posted on November 1, 2018, in Scotland. Bookmark the permalink. Leave a comment.