← Ballyturk
A Change in Management → 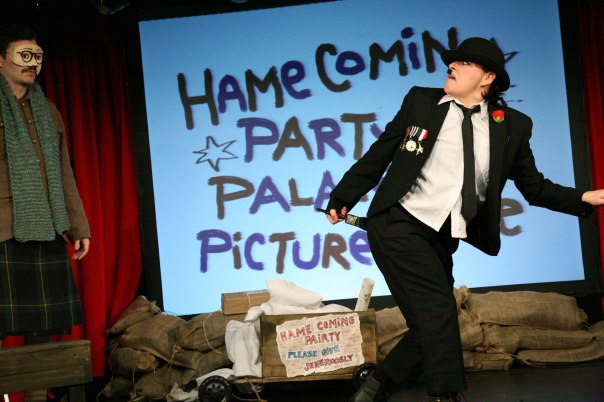 World War One saw the invention of unprecedented ways to kill and mutilate troops in unimaginable numbers. Many of those seriously injured survived through modern medical treatment but new battles lay ahead as they struggled to find employment and acceptance back home. Morag Fullarton’s drama tells the story of one such man, blinded and disfigured in France.

We are introduced to the primitive glories of the Picture Palace in Dunoon where a Charlie Chaplin silent film is being enhanced by a heavily pregnant, in-house piano player’s musical improvisations. There’s a watery break in proceedings which leaves the cinema in need of a new accompanist but not right away because the projector has broken too. This is of little concern to wee Willy, a boy barred from the delights of the Picture Palace for sneaking in without paying. He’s playing soldiers, dispatching the enemy while disparaging Kaiser Bill in song, when he comes across Bob, a discharged soldier, blinded and wearing a tin mask to hide the damage done to his face. The sound of an explosion takes us back in time to France where an uninjured Bob and his Aussie pal Billy deal with the realities of trench life. Then we are back in Dunoon. Then we are back in France. Then we are back in Dunoon. Then we are back in France. Then finally back in Dunoon (that’s a lot of leaping back and forth for a lunch time) where thankfully the play becomes much less frenetic and delivers a slower paced, more satisfying musical conclusion. 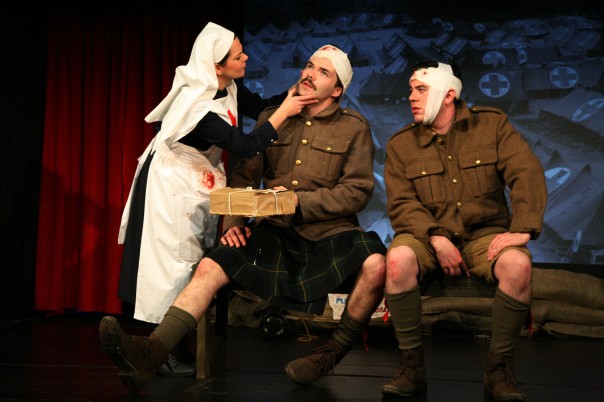 Helen McAlpine should be mentioned in dispatches, not least for the number of characters she plays-
Elspeth an expectant pianist.
Jessie a formidable manageress of the Picture Palace.
Marge a field hospital Nurse.
Camille a young French girl.
Betty a young girl from Dunoon.
Charlie Chaplin (as portrayed by Betty).
Of the above, Jessie is the strongest character. A redoubtable woman not overtly sympathetic to Bob’s plight but prepared to give him a chance to show what he can do.
Matthew Tomlinson’s Bob has a quiet dignity. The mask he wears to cover his ravaged face has a disturbing neutral quality, robbing him of all visible emotions. His passion was, and salvation may be, music.
Matthew Campbell’s Willy McCallum is an impish boy whose starry-eyed visions of war come up against its cold reality. He has the irrepressible optimism of youth, which he realises can be put to good use by helping someone else achieve their goal. Campbell also plays Bob’s Australian pal in France.

Morag Fullarton, a veteran of 5 PPP productions, including the excellent ‘Casablanca, the Gin Joint Cut’ has a rather good story to tell about a man returning from war, damaged on the inside and out trying to find his way forward. The chase and slapstick Charlie Chaplin action on the picture house screen, contrasts vividly with the stills of soldiers at the front and perhaps proceedings should have remained in Dunoon, as the scene switches to France do little to advance the main narrative. On target at the beginning and end but misfires in the middle.

Posted on October 9, 2018, in Scotland. Bookmark the permalink. Leave a comment.

← Ballyturk
A Change in Management →