← It Wisnae Me
The Last Picture Show →

Autumn is twinkling, the foliage is ripping itself from the branches in pastel scenes of gore, & theaters across the island are plunging script-first into their seasons with optimism & relish. In Glasgow, the lodestar of the Tron’s offerings is Enda Walsh’s recent addition to the corpus – Ballyturk. A weird play, we are dropp’d down a rabbit hole to a kafkaesque Bottom, that is to say of the Rik Mayall/Ade Edmondson kind.

So to the experience that is the mind-expanding malarky of Ballyturk. The singular setting is a hovelling bedsit, as dreary & featureless as the names of the two male actors; One, play’d by Simon Donaldson, & Two by Grant O’Rourke. These two foppish, fun-adoring fools possess a wonderful & professional chemistry, beaming out their disciplin’d soliloquies with fish-hook delivery, while waltzing thro’ quite irreverent dialogue such as;

Do bunnies have legs by the way?
We decided on five
Five – is that enough?
Lets hope so, eh!

Walsh’s ever-bubbling wordpool resembles bramble wine fermenting after using too much yeast. We were given respites, however, with some funny physical theatre around a gimmicky set, a retro 80s soundtrack, & trust me you just cant script some of those disco moves – but, of course, you can get Darren Brownlie in on choreography! From chomping rice crispies to the beat, to chucking darts at the other denizens of the Ballyturk universe, there was always something going on, completing the pincer attack on our voyeuristic senses. ‘It should bypass the intellect and go straight to the bones,’ Walsh told the Mumble. 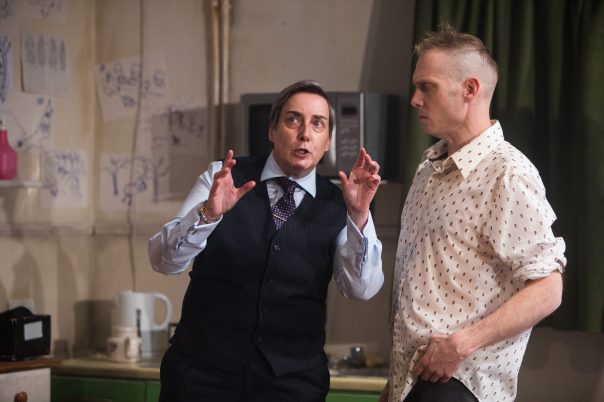 You can tell Galway’s golden boy had fun writing this. From Walsh’s manic imagination, striding like a behemoth to battle, comes a bizarro spiral of cerebral scene-making, a psychedelic mantra like Virginia Woolf on laudanum, like taking peyote in a sweat lodge. Each part of the process reminded me of those plastic wands, which you dip in a solution & blow shimmering bubbles into the air, which then <POP>. In this instance, Walsh was blowing rainbow bubbles of sheer humanity, which also abruptly halted with a pop before moving onto the next piece of what appears at first as enigmatic nonsense but is in fact a penetrating basilisk gaze into the core of the human condition. After one particular <POP>., there’s a sudden change in sensation as a third character arrives on stage – Three – play’d by Wendy Seagar. In the presence of this chain-smoking, androgynous creator figure, the lads revert instantly to infantililty – stunned into silence by the presence of such valhallan authority.

Seager was a slick & welcome addition, her arrival tim’d perfectly & whose presence gave a vital head to the curiously beautiful body we’d been checking out. Altogether, Ballyturk lasted ninety minutes, with no interval & I can see why. To have broken the trance would have been a sin. As this sublime & often ethereal play continued its relentless roll, I & everyone in the audience were transfixed; shuffleless, whisperless, enthrall’d.

Posted on October 6, 2018, in Scotland. Bookmark the permalink. Leave a comment.

← It Wisnae Me
The Last Picture Show →