← Outside In
Tap Dancing with Jean-Paul Sartre → 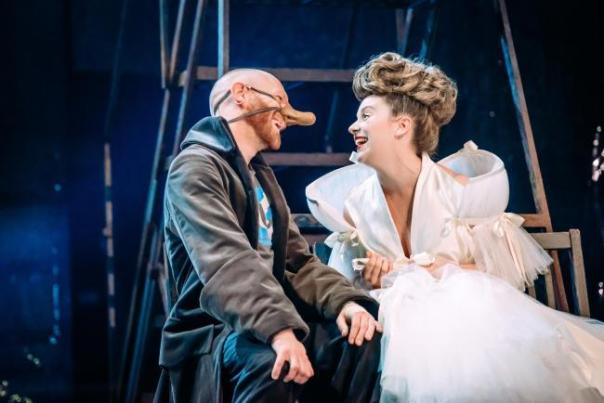 The story of Edmond Rostand’s Cyrano De Bergerac has been celebrated now for over 100 years. It was written at a time of social turmoil in France, where literature had taken on the character of oppression. Cyrano stands out as being set in a point of history but is an endearing love story that spans the ages, and lends itself well to Edwin Morgan’s feisty Scots translation.

This collaboration between Edinburgh and Glasgow theatre groups; The Citizens Glasgow and Royal Lyceum Edinburgh had a feeling that something happened that hasn’t quite happened before in theatre; an entire play totally dedicated to the very heart of theatre. In the modern world sets are changed without a curtain call and as part of the scene. The great stage at Glasgow’s Tramway – temporary home to the Citizens while their premises are being refurbished – took to this very well in its flexibility and incredibly simple function.

This play is nothing if not spectacular, with its amazing colourful costumes and over-the-top staging, each character being defined by their respective costumes – the more frills, the more important they were. Then we have the entrance of Bergerac himself (Brian Ferguson), a commanding presence immediately, with his thick Glaswegian and his poor appearance. This accent added freshness and life to the dialogue and all of the players delivered their lines with gusto. Jessica Hardwick as Roxane’s full-on Scottish accents sounded masterful, and brought sincerity and great power to her character.

Cyrano’s inspiring wisdom, that he called wit, was so absorbing. He grew and grew through his deeds that felt appealing to our hearts, everything was important. Bergerac in the original, has a famous scene wooing of Roxane offering love words to Christian, played by Scott Mackie, for Christian to use.

Bergerac was torn apart by the idea that she could never love him because of his big nose. As his nose and his love developed, he stole the show, and our hearts, every time, his presence changing as his humility himself grew to the size of his large nose. The poetic and romantic dialogue was coupled with sword fighting, choreography, food, wine, bread. Food that was served by the comic chef in chef whites (checkers) that were a few sizes too big.

The actors’ voices were arresting and travelled far into the theatre, also enhanced by microphones. Bergerac shouted in a fast song about “these are the cadets…” Bergerac’s love for Roxane was a secret to her and the tragedy was touched upon throughout. Her character was the centre of the show, her dresses and her words had the ability, like Bergerac, to convey serious thoughts.

This is a wonderful, joyful production, drawing us in to the complex plot and heartfelt performance by Brian Ferguson, screaming for love as Bergerac. The three hours simply flew by and leave you feeling grateful for having witnessed it. Not to be missed!

Posted on September 9, 2018, in Scotland. Bookmark the permalink. Leave a comment.

← Outside In
Tap Dancing with Jean-Paul Sartre →