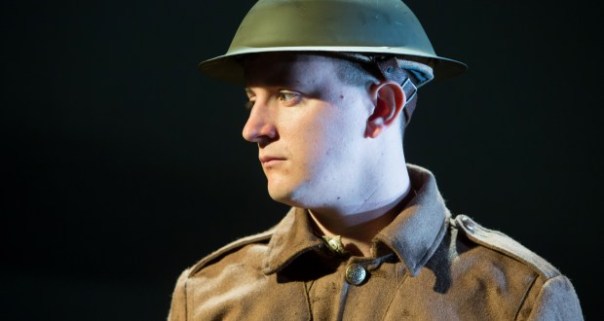 Based on the book by Michael Morpurgo ‘Private Peaceful’ is a play which explores the effects of war on a young man and the heavy cost of war in general. Onto a dimly lit stage empty save for a rickety camp bed and a pile of clothes a rather desperate, agitated young man walks on. He fumbles with his watch checking the time before addressing us the audience directly. Something is clearly wrong and though we don’t know what it is we can see from his agitation that he is waiting for something – something unpleasant but certain and unavoidable. As he marks down the hours to whatever fate he awaits he tells us his story – from a bucolic childhood, and adolescent struggles to the horrors of war.

Andy Daniel plays our hero, Thommo as a naive and excitable fellow who clearly is still more child than man. Vulnerable and easily influenced he signs up for war more out of fear of shame and a misplaced desire to impress his unrequited love, Molly than any great desire for adventure or moral need to defeat the Hun. Caught between his protective older brother, Charlie and his brain damaged brother Big Jo Thommo struggles to find a place for himself and drifts into whatever escapades Charlie is involved in whether it be poaching, working the fields or war.

I found the evocation of Thommo’s childhood in the country village of Iddersley very engaging – all skinny dipping, rambles through the woods and school-yard woes. At times the language has a real poetry to it and is reminiscent of Laurie Lee’s ‘Cider with Rosie’and captures the magic glow of childhood well. Particularly effective is a scene in which Thommo and his friends have a chance encounter with a lost pilot who shares his humbugs with the pals. I also found the material concerning Thommo’s adolescence and his thwarted teenage desires moving but what I struggled at times to feel engaged with was the actual part where Thommo goes to war. In a sense this is because we have all rather been overwhelmed with material about the horrors of war from when we read the war poets in school. It is very hard to find fresh meaning or emotion from the subject. There are moments when this is found but these are odd little moments of melancholy rather than violence such as the random kindness of a German soldier, the cheery bravado of a wounded and dying man. The play could have done with more of these quieter moments to be truly effective. 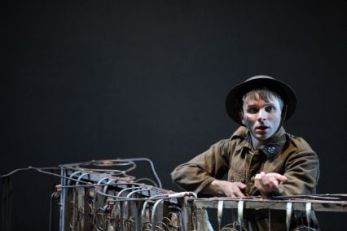 The set design and costumes are, though simple very evocative, the crude camp bed – cleverly used latterly as a dug-out – and the patched and re-stitched trousers and stained work-shirt emphasising Thommo’s rural poverty. The subtle use of sound also works well providing the ghostly echoes of a children playing, a marching squadron or the ominous ticking of Thommo’s watch. The biggest issue for me with the play was Daniel’s central performance. I understand that he is playing a character who is emotionally vulnerable, who at times is in a heightened state but I just found it rather exaggerated, hammy even. At its worst it undercut the script and took away from the emotional potential of the material. It is hard to wring genuine feeling out of the horrors of war when the same level of emotion is given to a bag of humbugs as an exploded grenade. Far better are the times when he takes on different characters – a smarmy recruiting officer, a cruel captain – which more ably show off his talent for inhabiting a role. Overall though the play would have worked far better if he he toned down his central performance a notch or two.Despite these misgivings I thought that overall the play expressed very well the sense that this was a war fought not by men but by boys. Indeed I found the brutality of the ending both a fitting tribute and a moving piece of theatre.