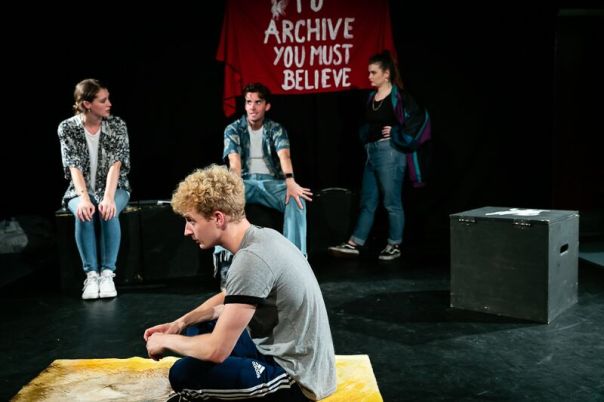 From the Gut is a young, in-your-face theater company whose affection for the stage is absolutely infectious. The swelling lovechild of three LAMDA graduates, the company has brought to this year’s Fringe a fascinating take on a classic modern tale – Liverpool Football Club’s come-back-from-the-dead triumph in the 2005 Champion’s League Final. Two of the trio, Nick Howden-Steenstra & Sam Angell, are the authors of the piece; but intriguingly they have left the direction of the play in the hands of the third muskateer, Max Harrison, who was still taking notes on the performance in the seat beside me even this far into the run. A third eye, indeed, & a fresh mind of course, & the overall texture is cooked up like a really tasty lobscouse.

As a play we are given three different eyeglasses through which to follow the action, from the scrappy semi-final victory over Chelsea to the adrenaline-bursting excitement of the penalty shoot-out. A young Liverpudlian lass has bought her jobless Glaswegian male friend a ticket to the actual match, crossing the barren, boozeless land to the stadium together in Istanbul like downed WW2 pilots in the deserts of North Africa. The second group is your typical Northern family in their madhouse terrace, Royle Family style, sat around the box with banter & beer. The last scene is set in a hospital, where a radio DJ is being treated, glued to both the box & the telephone to his son in Istanbul. All three sections of the revolving tryptych have subtle sub-plots, & all are delivered by the same guise-donning group of five polished-like-a-crystal actors.

To aid the story, six black boxes are maneuvered into position, out of which costume changes & props are pluck’d out with great rapidity to further embellish each scene. The smoothness of the transitions added an extra dimension to this energetic play; we were watching true theater here – Shakespearean in stagecraft, Tennessee-Williams in substance. There is also a terrific soundtrack splicing the scenes, & the occasional radio-phone in, which with each caller spreads more depth to the play, showing how this one occasion touched so, so many people. And of course, there’s the happy ending, which most folk know is going to happen, but still feels as jubilant all the same, so rewarding & realistic is the performance.