Not every play at the Fringe is the product of a large cast & company. The Mumble went out & about investigating solo & duo plays 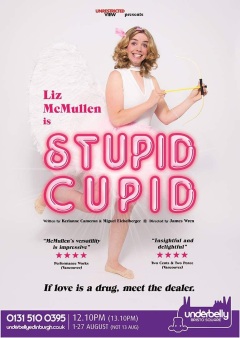 Hailing from Paris by way of Chicago (which might explain the shiny suit and onion-johnny t-shirt), Mick peddles an absurdist set to get you thinking and give your chuckle muscles a full workout. From the get-go, he deconstructs the comedy entrance – just how many ways are there for a performer to come on stage?  Then he tans the ass out of audience participation: masochists to the front row here. Mick pares down his comedy to find some moments of real comic gold where you find yourself laughing along with the rest of the audience without really knowing why – and then he throws that moment right back at you so you can laugh some more. He’s a gentle, charming, head-trip of an act.  Prepare yourself for 2,700 seconds of physical comedy, absurdly twisted improv, song and dance and full-on audience participation that will leave you wanting more of this fresh, intelligent and beguiling act.

You Down There & Me Up Here 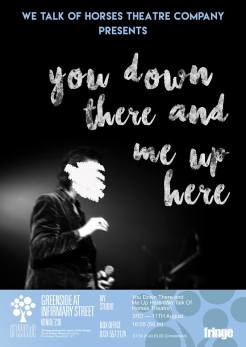 We Talk of Horses are a theater company consisting of two fine young thespian gentlemen, Pip Williams & Sam Rees. I was lucky to catch them just before the end of their run & found myself immersed in the drug rehab of a certain famous singer called Nick Cave. Sam was Nick, & Pip played the doctor, & together they passionately romp’d thro’ an enjoyable & abstract, arty, intellectual script. It is perhaps one of the strangest subjects I’ve ever seen treated at the Fringe, but its presentation was completely believable, so energetic are the two lads in their interchanges. This is stripp’d back theater at its very best; no props, no set, just two talented & daring actors whipping up a storm of illusion.