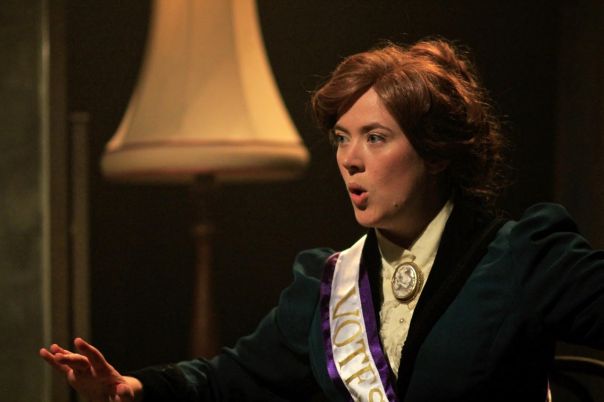 Joanne Hartstone has brought two solo plays to this year’s Fringe, & I have had the gladdening delight of seeing them both. On this second occasion, just as with ‘The Girl Who Jumpd Off The Hollywood Sign,’ Hartstone has penetrated the obscurer mists of history with a thespian eyeglass & found us a figure from her native land. Breathing life into visionary clay, her subject is Muriel Matters, a romantic young actress from ‘claustrophobic’ Adelaide who was swept along by, & then became a major figurehead for, the Suffragette movement of the United Kingdom.

This perfectly sequenced timeflying frolic sees Hartstone at her very best – effortlessly demonstrating her bewitching ability to implant a story & then deliver it to a proper conclusion through all its subtle strands, while entertaining the audience at the same time. A paragon of performance in this particular piece, as I was watching I thought to myself this is exactly the way I would like to learn about Muriel; not via the sterile pages of a book; or the observational fly-on-the-wall of a movie; not even the lectures, voiceovers, photos & grainy films offered by a well-made documentary – but real flesh & blood & original words keenly researched out of Muriel’s own life & mind.

The parallels between Muriel’s life and my own were immediately apparent when I began researching her life and achievements. I was born mere kilometres away from Muriel’s place of birth – separated only by the North Adelaide parklands and 107 years. She began her career as an actress and elocutionist – I began my career as an actress and a singer. Muriel was a teacher – I am a teacher. Muriel left her home in Australia for the bigger theatrical industry in London – I travel to the UK at least once a year to participate in theatrical festivals.
Read the full interview

The true beauty of Hartstone’s art is her ability to turn monologues into conversations; it feels like we are with her in a chamber room, or having high tea in a salon, sharing a passionate chit-chat about both our goings-on, but of course we can never get a word in edgeways – yet the warmth of her performance really does engage us all on an individual basis. As a play it is well-paced, informative, & above all extremely watchable. As historical document That Daring Australian Girl is a perfect & poignant reminder that many of the things we globalities take for granted – desegregation in America, universal suffrage in Britain – were fought for with extreme tenacity in the face of enduring persecutions, & seeing Hartstone recreate the horrors that brave young women endured in the grimy old corridors of Holloway prison is the stainless exemplar.