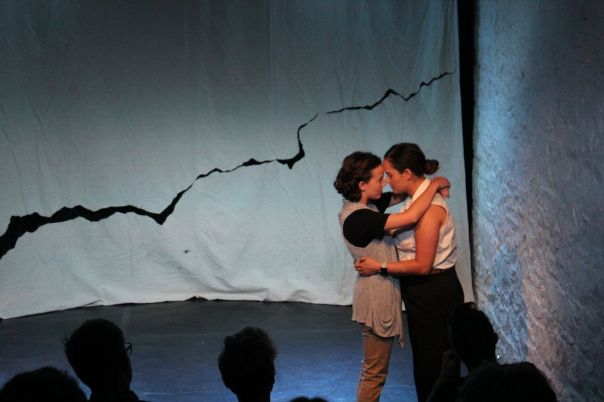 Bold, unexpected and gripping, Healthy Oyster Collective’s ‘bad things happen here’ is a brilliantly-acted feast for the imagination. Set in an alternative universe where strict curfews, round-the-clock CCTV and constant police (known as ‘dogs’) supress speech and thought, ‘bad things happen here’ follows the lives of multiple nameless individuals as they conform or rebel against the system. There’s no denying that the prevalence of The Handmaid’s Tale, Black Mirror and Stranger Things have made dystopian theatre and film fashionable. Indeed it seems that we the public relish wincing at the nightmarish woes of characters trapped within a cruel alternative universe, forever suffering and never escaping. What makes bad things happen here so brilliant, however, is the way it manages to get all of the dystopian stuff in without losing us as an audience – it cuts so close to the bone that we can’t suspend our disbelief too much, and the show is all the more powerful as a result.

bad things happen here opens with us being thrown into a rapid, quick-fire exchange between two individuals (Marieta Carrero and Molly Winstead) as they worry that the police are closing in on them as they are trapped in their home. Playwright Eric Marlin cleverly demonstrates the level of repression within the system as the language that the characters use throughout the show becomes infrequent and stifled: a clever choice which demonstrates just how severe the government’s grip has become. The delivery of said language is faultless, with Carrero and Winstead exchanging dialogue almost melodically in a way that only serves to make what they say more powerful. From reporting a rape to a clinical yet frightened doctor, to a married woman demanding sex from a sex worker, communication is efficient and, when necessary, emotionless. Both Carrero and Winstead navigate these shifts effortlessly, delivering magnetic performances throughout: Carrero’s funny but horrifying detachment in the role of a factory supervisor and Winstead conveying vulnerability and fear with brilliant subtlety were particular highlights of the show. 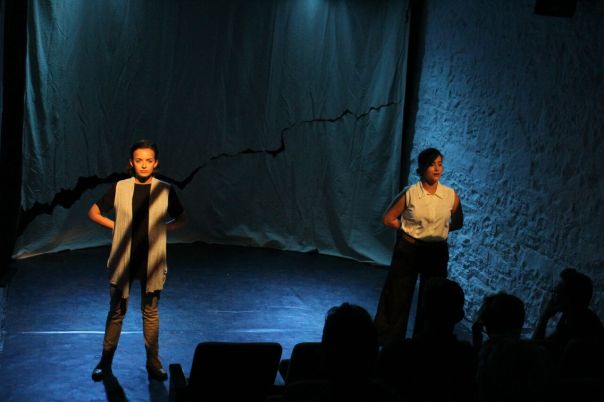 Dressed in grey and white costume, with the lighting alternating between bright and clear or fractured and hazy, tech, costume and lighting design is simple and effective. One scene is lit entirely by torches pointed at us: an excellent turning of the tables as we become the subject of the piece. A simple jagged rip through a white bedsheet acts as startling backdrop that the actors never disappear behind: rather, we become their oppressors as we keep a trained and watchful eye over them for the entire show. Though the script perhaps sometimes suffers from occasional moments of cliché – for example, the metaphor of ‘cogs in the machine’ is perhaps taken too literally at times – the show manages to elegantly capture the human descent into compliance within an oppressive system.

The staging of the piece is expertly executed by director Lila Rachel Becker, who never has Carrero and Winstead linger on moments of tragedy or humour, but rather keeps the piece thumping with energy throughout. Marlin’s pacey and intelligent script demands this energy, as we are constantly hearing uncomfortable things – the peak of this being Trump quotes about women embedded into the script, which place the piece back into the realm of necessary and important. Here, Marlin is proving that bad things do indeed happen here long after the actor’s final bow, and it is this sentiment that elevates this production from dystopian fantasy to an urgent and brilliant reminder that theatre can and should be political.