An Interview with Steve Attridge

Steve Attridge is a very cool guy indeed & his theatre is, dare we say it, even cooler. The Mumble were lucky enough to catch a wee blether…

Hello Steve, & welcome back to Edinburgh, how has your year been?
Steve: Hello to you. Been a great year. Went to Komodo Island in Indonesia to see the Komodo dragons, the big cannibalistic dinosaurs that can grow up to three metres and look at you with Neanderthal contempt. On the island you get up close to them – health and safety doesn’t exist, which is refreshing. Also went to Cambodia and did volunteer work with elephants in the jungle. Fell in love with them all. Was exhausting – temperatures of 40C – and exhilarating. Also got a few plays written which are doing the rounds. Been working on a book.

Last year you brought Dick in Space to the Fringe, how did it all go?
Steve: Very good experience. Was my first time so I learnt a lot – what to do, what not to do. Some excellent reviews. People liked the show and I’ve performed it since. One bad review but I can safely say that it’s been taken care of and the body will never be found.

What have you got for us this year?
Steve: Ron the Plumber meets God-Cilla. One man show. Part of the Free Fringe.

That’s quite an interesting title; where & when did the idea come from?
Steve: Ron first appeared a few years ago in a comedy review I wrote and performed. Audiences really liked him so it was always in my mind to write a one man show for him. I wanted a showcase for him – a bit of narrative with an episodic mix of stand up, comedy character and bits of theatre. An OCD character on the rampage through the pipes and cisterns of the nation in a quest to destroy something evil.

And now the all important question, you’ve got three famous figures from history coming round for dinner. Who would they be & what would you cook; starter, mains & dessert?
Steve: They would be Judas Iscariot, Charles Darwin and Marie Lloyd. Starter would be unleavened bread and oil – Judas would appreciate this because it was what was eaten at the Last Supper. Mains would fish and Darwin could tell us how it evolved and eventually turned into us. Dessert would be spotted dick and custard because Marie, as an East End girl, would appreciate it.

Can you tell us about your time working with John Cooper Clarke, & what did you learn from the experience?
Steve: I learnt to keep a show moving, create a persona, don’t take anything too seriously and don’t drink barley wine. 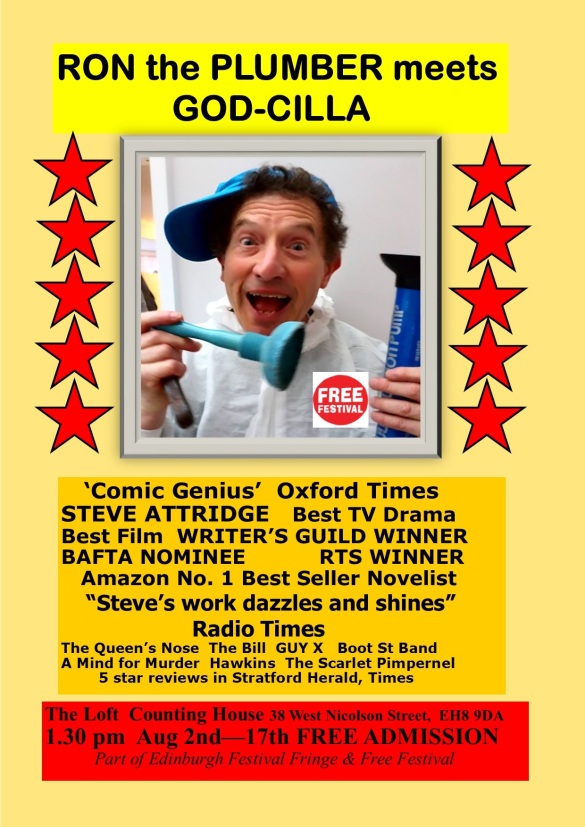 OK back to Edinburgh; can you tell us about your stagecraft; the music, sound & stage design this year?
Steve: Tried to keep it simple. A few props, a few surprises, let the character carry the show and get rid of anything that overcomplicates or detracts from him.

How much of Steve Attridge is there in Ron the Plumber?
Steve: I’m obsessive (though not about plumbing), a bit anarchic and often carry things too far.

You’ve got 20 seconds to sell Ron the Plumber VS God-Cilla to somebody in the street, what would you say?
Steve: Jokes hot from the porcelain with OCD deranged plumber Ron. Alarming suicides, traumatised French Poodles, exploding toilets, God disappearing, disastrous sign language dating and rabid Nazi bath taps. No better way to spend forty five minutes than to dance the thin line between sanity and ballcock derangement with Ron.

For someone performing their own show for the first time at the Fringe, what advice do you have for them?
Steve: Pace yourself.

What will you be doing after the Fringe?
Steve: Going to Spain to write, play tennis and drink wine.