An Interview with Hayden Wood

Interactive Theatre International serve up both good food & brilliant theatre at the same time. They’re bringing four shows to the Fringe this year, & the Mumble managed a wee blether with one of the cast of the very hilarious The Wedding Reception…

Hello Hayden so where ya from & where ya at, geographically speaking?
Hayden: Home is the Lincolnshire countryside, between Stamford and Grantham. At the moment though, I am living in London.

When did you first find yourself getting into the dramatic arts?
Hayden: I was terrified of getting on a stage until I was about 10. I ended up playing the Dame in a school pantomime, and that show pretty much made me do a 180! I performed in plays time to time throughout secondary school, but going to University is when it became a true passion for me.

Can you tell us about your theatrical training?
Hayden: I actually didn’t go to Drama School. I studied History at The University Of York. About half way through my studies I started working as an actor professionally. I’ve always been a firm believer of on-the-job learning. I spent a lot of time self-motivating: reading books on theory, keeping my eyes (and ears) open for opportunities, talking with other actors. The biggest thing was trying to keep realistic self-assessments, and finding new ways to grow and develop.

You’re washed up on a desert island with an all-in-one solar powered DVD/TV combo & three films, what would they be?
Hayden: That’s easy – Forrest Gump, Drive and Liar Liar. Unless an eleven season Frasier marathon also counts as a movie? 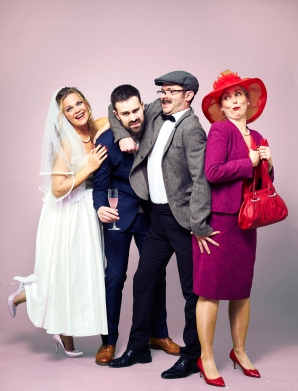 What does Hayden Wood like to do when he’s not being creative?
Hayden: Is coffee a hobby? Actually, I am into loads of things! I’m a big reader and chain-listen to podcasts, but music is a serious passion of mine. I love discovering new artists and going to gigs, or just staying home and noodling around on my own instruments. I’m also very into sport, and I maintain a weekly (ish) football and culture blog called The Armchair Journeyman. Oh, and travel; you can’t beat a good city break.

Can you tell us about your time with Belt Up Theatre?
Hayden: I worked for Belt Up between 2009 and 2012. That was when most of the ensemble and artistic directors (including myself) lived up in York. I originated roles in Outland, Lorca Is Dead, Odyssey and Octavia and performed in The Boy James, The Tartuffe and various others. I went to Edinburgh Fringe with Belt Up in 2010 and 2011 – which was great. I also co-wrote the music (with Alexander Flanagan-Wright) for Belt Up’s first musical; The Beggar’s Opera, and composed bits and bobs for the company’s various other shows. It was an incredibly special time in my life, and one that’s given me some of my very dearest friends. Belt Up allowed me to cut my teeth as an actor, and grow as a person. I even met my girlfriend working on a Belt Up show. I’m getting all sentimental thinking about it now! I could go on and on and on, but I won’t bore you. I’ll only say this; without the opportunities and experiences afforded me by working for that company, and the people I met, I wouldn’t have become a professional actor or the performer I am today. 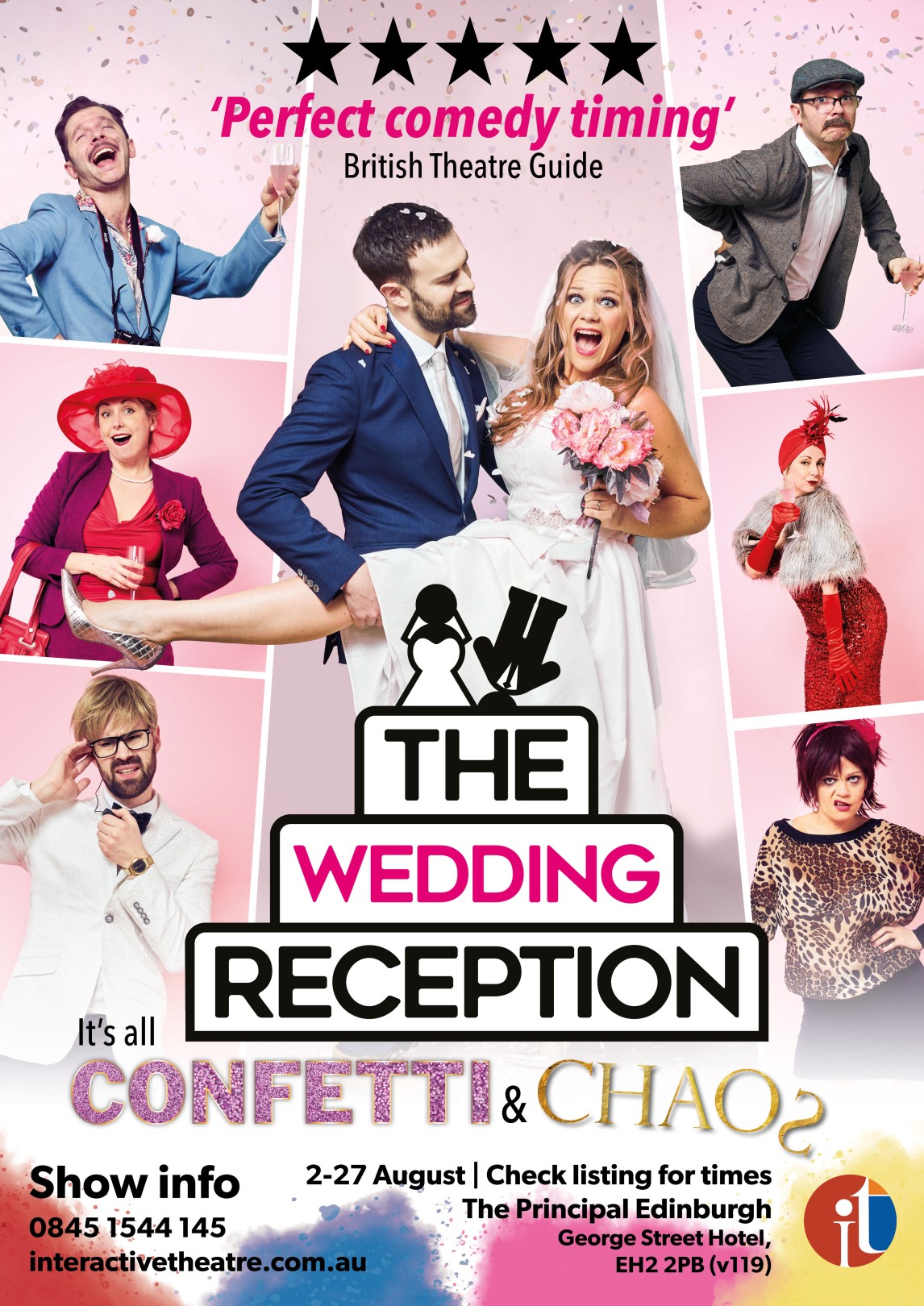 You have been with Interactive Theatre International for less than a year, how did you get involved & how are you finding it so far?
Hayden: I got involved by swapping jobs with a man who looks like me. I’d been in the West End cast of The Play That Goes Wrong for a year and- at the end of my contract- the actor who took over the role I had been playing mentioned I might be interested in auditioning for the job he was stepping away from. That actor was a tall mustachioed man called Jack Baldwin and that job was playing Basil in Faulty Towers The Dining Experience. I had my first FTTDE gig in August 2017, and started on The Wedding Reception: Confetti & Chaos in February of this year. It’s been an incredible year working for ITI. I’ve made some great friends, met some extraordinary performers and creators, been to Antigua, twice to Australia and all over the UK. More to the point, it’s a real pleasure to work on two shows which I think are genuinely fantastic. I’ve made some great memories and am looking forward to plenty more in the coming years. The company genuinely feels like a big family. Everyone supports one another in all their endeavors.

This Fringe you will be bringing The Wedding Reception to Edinburgh, can you tell us about the Show?
Hayden: Will and Stacey have just got married and are not expecting a wedding reception. Fortunately (for us, perhaps less so for the happy couple) Stacey’s parents have organised a surprise party with all their friends and loved ones (the audience). As the evening unfolds, laughs are had, drinks are drunk, and old stories and secrets bubble to the surface. All nine of the characters (played by the four of us) want the evening to go well for Will and Stacey but- as well all know- the best laid plans…. There’s an immense amount of heart and warmth in the show, it’s fast-paced and really funny. And the audience get a three course meal. What’s not to love?

Do you & the cast socialise outwith rehearsals?
Hayden: We tour all over the place, which is a lovely way to bond with people. Many an ITI friendship has been forged over a post-show pint in a hotel bar in the middle of nowhere. And we all go to see each other’s shows outside of ITI as well. I’m organising a rounders game for the Fringe crew. The Basils have a Whatsapp group too! We keep busy, as a group. Come to think of it, I might suggest a Fantasy Football league…

How will you know & feel when you have just given a good performance?
Hayden: In both Faulty Towers The Dining Experience and The Wedding Reception, I think it’s about two things; rhythm and audience connection. Both shows have a great collective rhythm which builds throughout. When it sits right, it’s like flying. The audience connection is even more important in these shows than most I’ve worked on, because we’re so physically close to people, and because we encourage participation. No two shows are the same so a good performance, to me, feels like one in which audience and actors have been united in a journey and experience. It’s our job to be open and receptive to our audience and, in a way, all the audience need to do is relax and let themselves be taken on a journey. I love it when, playing Ricky (the best man in The Wedding Reception), an audience member asks a question of genuine interest about my past life with Will, the groom. That’s a lovely feeling, because it means that person has given themselves over to the story we’re telling. They know they’re watching actors, they know they’ve bought a ticket, and yet they are prepared to suspend their disbelief and go along with whatever we throw their way. A show in which people do that – partly because of our work and partly because of their willingness – always feels like a good show to me.

You’ve got 20 seconds to sell the show to somebody in the street, what would you say?
Hayden: It’s a big-hearted and chaotic two-hour story about love, growth and how nobody’s quite perfect, but most people are pretty bloody wonderful. It has singing, dancing, a three course meal and underpants! There is super-fast multi-rolling, razor sharp comedic timing and just the right amount of audience participation! Silliness, warmth and a lovely bit of escapism is promised and I guarantee there is not another show quite like it at The Fringe this year. Did I mention the underpants?

What will you be doing after the Fringe?
Hayden: I’m busy busy with ITI in the autumn, going to Wales, the Lake District and Gibraltar. In November and December I’ll be playing Burke in Burke and Hare (another Edinburgh connection) at Jermyn Street Theatre in London. We originally did the show at The Watermill, so it’ll be great to give it a second life at Christmas!

Tickets – all tickets include 3-course meal and 2-hour show: