An Interview with Sam Rees

Sam Rees possesses a brilliant theatrical mind, & is just about to unleash a Nick Cave inspired, dreamy love paean upon the Fringe. The Mumble managed a wee blether…

Hello Sam so where ya from & where ya at, geographically speaking?
Sam: Hi! I was born in North-East London but moved to East Anglia when I was 2. I grew up in a town called Bury St Edmunds, about 20 minutes from Cambridge.

When did you first find yourself getting into the dramatic arts?
Sam: Looking back, I think when I learnt all the words to ‘Commotion in The Ocean’ before I could read, it was already pretty inevitable.

What does Sam Rees like to do when he’s not being creative?
Sam: Mainly earn money in order to be creative! But I also love music and have recently gotten back into swimming after some less than healthy years at university.

How, where, when & why were ‘We Talk Of Horses Theatre’ formed, & what is your role in the company?
Sam: The company was formed by me and one of my bestest mates, Pip Williams, who also studied drama at UEA. We solidified around an idea about July 2017. We’re both artistic directors, as well as (for this project) writers and performers. We brought in another mate to direct, another to do the music, and another to do the publicity art. Next time round I think the pair of us would like to switch up our roles again, scare ourselves a bit.

What is the company ethos, exactly, what are trying to achieve?
Sam: We formed because we believe that when it really comes down to it theatre is more collaborative than it is competitive. Particularly in this day and age, with more and more people wanting to succeed at it, we think it’s so, so important to form bonds, compromise, make friends, share ideas, enrich each other. No man’s an island. As we expand we want to bring more and more people in, add more talent to the melting pot.

Last year you were in Edinburgh with Suited Elephant’s ‘POV,’ how did you find the experience?
Sam: That was an amazing experience. And for me, very formative. It was a verbatim show about pornography, and as such there was no proper writing involved, but I was given the opportunity to lead some workshops and put the piece together, edit, arrange, be a dramaturg essentially. I don’t think any of us had worked on a piece like it before, so we were quite unsure about how it would be received. Then we got there and spoke to our audiences, saw we were getting some 5 star reviews, and it just took us aback. To be validated in that way is very intoxicating. It made me realize I wanted to make work, not just be in it.

This Fringe you will be bringing You Down There and Me Up Here, can you tell us about the show?
Sam: I don’t want to just bash out the flyer blurb, but the quick pitch is it’s about two young men struggling to hang onto their identity in the face of crisis. One is a recovering heroin addict who is convinced he’s the rock star Nick Cave (and maybe he is) the other is a man who has fallen head-over-heels in love with someone while already being in a relationship. It follows their parallel journeys, their struggles to fulfil their desires, and how they change for the better or worse. It’s about the nature of truth, our expectations from life, how we see love and devotion, what it means to be obsessed with someone, and the difference between who we are and how we are seen.

Where did the idea come from for You Down There And Me Up Here?
Sam: The pair of us had been struggling with a direction for a few months, and then we experienced some work that seemed to point a way ahead-particularly ‘Sad Little Man’ by Pub Corner Poets and ‘Men In The Cities’ by Chris Goode. We wanted to make something lyrical, almost like prose-poetry, but also something cathartic, where we could try and crush a few of our own demons along the way.

Why Nick Cave?
Sam: We both love him. I think he’s extraordinary. And his music is equal parts violent and romantic, fevered and beautiful. It had to be someone we both idolized to an extent, for the basis of the show to work.

You’ve performed the play already this year in Norwich and London. How did it go & are you tweaking as you go along?
Sam: Yes we’ve tweaked, mainly in order to make the show say what it’s trying to say better, to be its best self. It’s been hugely educational both times. I’m personally very happy with the five shows we’ve so far done, and I think they will go to strengthen our performance at the Fringe. We’ve ironed out the cracks now, it’s tight and muscular and dynamic and ready for whatever Scotland throws us at us!

Do you & the cast socialize outside rehearsals?
Sam: Yes, excessively. To the point where we have already come up with some rules about not going straight to the pub after every show in Edinburgh. 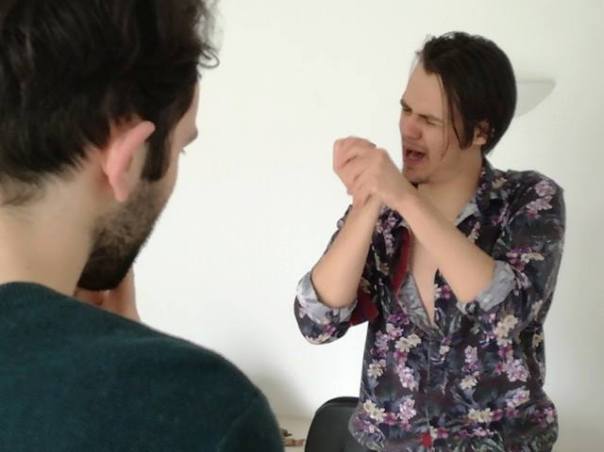 What do you hope an audience member will take away from the show?
Sam: It might frustrate them, it might confuse them, hopefully it will touch them on some level. It’s very wordy and dense at time but I really think fundamentally it’s got a huge, beating heart at the middle of it. So it would be nice if people see something of themselves in it. So far it’s always been a show people want to talk to us about, have questions about, want to unpick, and for me that’s a huge compliment. You want people nattering about it at the bar afterwards.

What will Sam Rees & We Talk of Horses be doing after the Fringe
Sam: Personally, I will be sleeping, eating some greens, earning back a bit more money. We’ve got some possible places we can take this show, but we’ve also got ideas coming out of our ears for the next one, and we’re still so young, so I reckon we’re going to try out as many different things as possible. It’s our time to learn, and fail and get better. And for making more friends along the way!

You Down There & Me Up Here 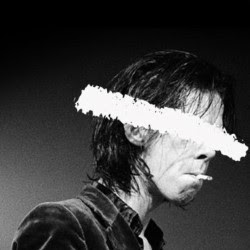