The dashing, young, talented director that is Robin Osman seems to like World War 2. Last year he brought a Vichy France inspired piece to the Edinburgh Fringe, & the other day, for two nights, he served up Loring Mandel’s very excellent Conspiracy at the Assembly Roxy. His cast mirrored that of the film The Expendables, but here the Hollywood A-Listers are Edinburgh theatrical Don Juans such as Ben Blow, Matthew Jebb, Chris Pearson & Jonathan Whiteside.

Conspiracy is a play about the now infamous meeting at Am Großen Wannsee 56–58, a grandiose villa at the edge of Berlin, lapping against gorgeous lake waters &, in January 1942, the setting for the most terribly implicative ninety minutes of conversation the world has ever known. The Endlosung had come, the Jewish Question had an answer. From ‘Vladivostok to Belfast’ there would be ‘no Jews, not one!’ all murdered by poison gas in efficient factory fashion & cremated into dust. The drama of the piece is contained in small measure within the personalities of the fifteen high-ranking German officials at the meeting, but it really pursues our psyches like a slavering beastie thro’ the monstrous promises of ghastly futurity polluting the play’s dialogue. The author, Loring Mandel, imagined the scene at Wansee & replicated its oral ambience to the best of his abilities; which means, pretty much, its brilliant.

Conspiracy was at first a joint HBO-BBC TV special, which won an Emmy, a Golden Globe & a Bafta, & was created on the back of a single document found in Berlin – the only one that was never destroyed. Of his use of this materielle, Mandel told the Mumble;

The document that survived was very highly redacted, by three different people: first by Eichmann, then by Müller, then by Heydrich himself. So all that it really contains is the cast of characters and the sequence of events, the agenda. But there’s other information—not much, but there are comments that Eichmann made when he was captured and more comments during his trial. That’s really the only hard material we have. So I spent a couple days in the archives of the Holocaust Museum finding out as much as I could about as many of the participants as I could locate in those files. I also looked at the transcripts of the Eichmann testimony. Then I did research at the Leo Baeck Institute in New York, the YIVO Institute for Jewish Research in New York, the museum in the building where the conference took place, and Simon Wiesenthal Center in Los Angeles. When I had enough of a feel of the background of the participants, plus what I had gotten from the conference itself, I wrote the first draft, and that was finished in January of ’98. That was submitted to HBO, they said they wanted to proceed with it, and they hired a full-time researcher to provide supplementary material, and she was able to find out a great deal more of the background of the characters than I had been able to get. We ended up with tremendous amounts of research

A few years later, Mandel decided to reconvene his TV classic with the stage. ‘The film is a one-eye process,’ he told us, ‘it’s monocular. Stage is binocular, and it makes a real difference. In film, it’s easy to begin a scene in the middle of a sentence, because you can cut into it. You can’t do that on the stage because the character is there and talking before, unless you do it all with lights, and then it really isn’t an adaptation. The only reason that I did a stage version of it is because I felt it was something that people should be made aware of—young people particularly. I thought it was something that schools could do, and churches and synagogues and so on. That’s why, because I never thought it was a big commercial property. So the fact that it’s been exposed here, I think that’s absolutely wonderful.’ 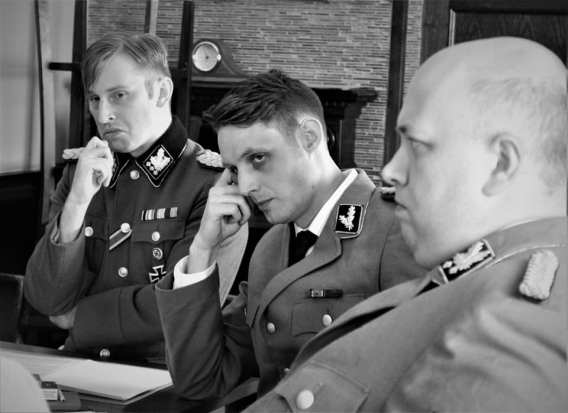 So to Edinburgh & the Assembly Roxy. I took my seat in the far top left corner, directly before the end point of a ‘Last Supper’ style arc of tables, behind which was another table corncucoping with fine wines & meticulously laid out chips n dips. Here was David Taylor’s Eichmann – the guy caught by Mossad agents in Argentina in 1960 –  the shadowy holder of the scythe, who would greet the 14 guests with a foot-stamping ‘Heil Hitler.’ One of these was Matthew Jebb, whose SS Oberfuhrer Erich Neumann sat down right in front of me, rattling on about the Four Year Plan, & somebody who would one day save lives by requesting that Jewish workers in firms essential to the war effort were not to be deported for the time being. 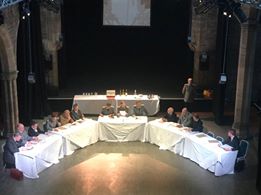 So in they came, lieutenants of the Nazi experiment, key representatives of agencies created by the Fuhrer in order to transmit his imbecilic White Supremacist philosophies, & to turn them to reality; the ultimate of which was the rendering ‘Judenrein’ of Europa to unfold. At their heart was Jonathan Whiteside’s Heydrich, play’d with a commanding & sneering hostility – like the Devil at icy Cocytus with his anti-pantheon at his feet, his telligible snarl barking his masters’ orders without complaint. ‘After the war this is my home, a marvelous home,‘ he chirps on first arrival. He’d be assassinated in Prague within six months.

As a drama, we had Heydrich’s & Eichmann’s slow roll-out of the Endlosung – half history lesson, half surreal vision – interspersed with excellently presented buffet intermissions where the hubble-bubble mumblings of twos&threes conversations were broken by flash-fires of actual dialogue. It was all such a bouncy script to behold, a masterwork of multiple voices as the single item on the conference’s agenda slowly ripened into truthdom like rapeseed in the Spring. To counteract the growing ‘storage problem‘ of Nazidom’s Jews – millions had been acquired through Hitler’s conquests – euthanasia would be expanded on a massive scale when, to save the soldier’s sense of honour – they didn’t enjoy shooting women & children – the systematic extirpation of a race would be achieved thro’ poison gas. Eichmann’s mini emotional break-down as he described the sounds of the dying being almost drown’d out by a gas-truck’s motors was a high point in the play.

Such a powerful ideological performance was this, that at the end I was waiting for some cretinous Neo-Nazi to stand up applauding wildly & cheering. Of course it never happened, this is gentile Edinburgh, but we were all transfixed by both the morbid curiosity & the elk-paced intensity of the piece. The finely uniformed gentleman actors were as one soul, a very precise & genuine performance. Conspiracy is a warning of how sick & how sterile human compassion can become, & plays handling such hot potatoes of the conscience should be treasured – not for their hateful ideas – but to remedy Wilhelm Friedrich Hegel’s observation that, “We learn from history that we learn nothing from history.”