An Interview with Mark Down

There is something quite brilliant about the dramaturgical puppetry of award-winning Blind Summit. The Mumble managed a wee blether with its director-in-chief…

Hello Mark, so when did you first develop a passion for theatre?
Mark: I saw Dad and Mum in the village pantomime when I was about 8 I think. As a teenager school took us to see three Pinter plays at Bath Theatre Royal which I found extraordinary and started reading Pinter as a teenager. I got very into musicals for a while and tried to “see them all”. When I was 18 I went to see Romeo and Juliet at Stratford.

Can you tell us about your studies?
Mark: I trained to be a doctor first. After working for a couple of years as a junior doctor I retrained to do acting. Then I discovered puppetry and that I have mostly made up myself with collaborators.

What for you makes a good piece of theatre?
Mark: It needs to be funny, clever and teach me something. It needs to be about something – i.e. political. And the thing that makes me enjoy it is at least one good performance.

You’re washed up on a desert island with an all-in-one solar powered DVD/TV combo & three films, what would they be?
Mark: Oh God that’s a horrible thought – City lights (Chaplin), Casablanca, 310 to Yuma

What does Mark Down like to do when he’s not being creative?
Mark: Play tennis

Can you tell us about Blind Summit?
Mark: Blind Summit is a multi-award winning London-based, internationally touring producer of puppet-based theatre. For twenty years we’ve have consistently subverted people’s expectations of puppetry: from giant storybook characters in the opening ceremony of London’s 2012 Olympic Games to The Table, a globally successful touring production that completely up-ended audiences’ understanding of how puppet and puppeteer communicate.

How did you get involved & what is your role in the company?
Mark: I am the Artistic Director of the company, which I founded in 1997.

What are the processes behind designing each puppet’s aesthetic?
Mark: We work in two ways. With a text we look for an aesthetic that will illuminate some aspect of the text, usually a formal allusion. Puppets tend to bring attention to the metaphorical aspects of the text. We also make work that starts with the puppet we want to play with and write the text from there. i.e. the other way round. That can get very difficult. That’s how we are making Henry.

After 20 years of being with Blind Summit, how has your own take on puppet theatre evolved?
Mark: I am less preoccupied with comedy and existentialism and more engaged by story.

Can you tell us about the Opening Ceremony to the London Olympics?
Mark: It involved putting a huge amount of time and effort into a very little amount of time. It was extremely exhilarating being on the stage on the night. Danny Boyle and the Designer Mark Tildesley were really inspirational to work for. Putting together a team of 20 puppeteers and 35 volunteers was amazing and we made good friends.

Can you sum up the Fringe experience in a single sentence?
Mark: Fast paced and invigorating. 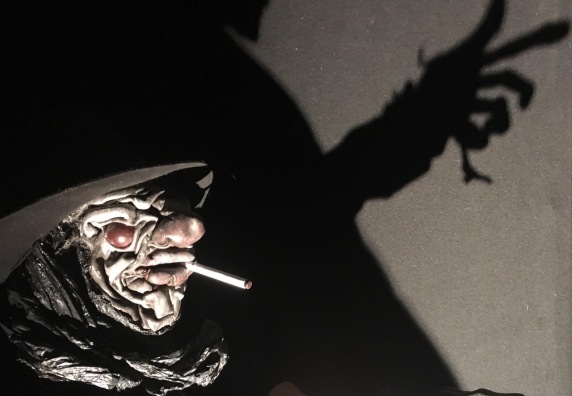 This year you will be bringing ‘Henry’ to the Fringe. Can you tell us about it?
Mark: It’s a one man, three man show with puppetry called “Henry”. It’s narrated by puppeteer, director and “control freak” Mark Down who explores the mystical power of puppetry, assisted by two, slightly sinister, masked puppeteers. Things get out of control when the spirit of “Henry” enters the puppet. Who is “Henry”? What does he want? And is he dangerous? At least I think that’s what it’s about – we’re still making it!

If you’re flyering in the Edinburgh streets, what would you say in twenty seconds to convince someone to see Henry?
Mark: Anything might happen, come and see!

What will Mark Down & Blind Summit be doing after the Fringe?
Mark: Sleeping! And thinking about making the next Blind Summit show.