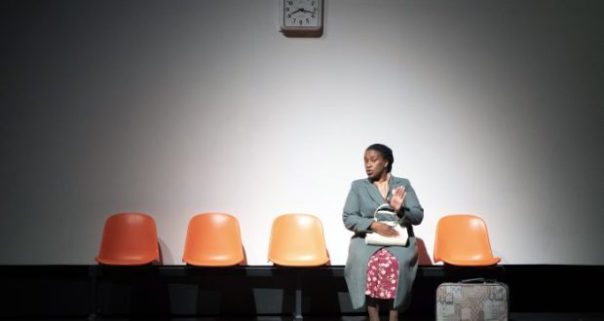 The monologues which make up ‘Talking Heads’ were originally written for and presented on BBC2 over 25 years ago and I myself have vague recollections of them from that time. They have of course been performed since on the stage but what is special about these performances is that they are taking place here in Leeds where for the most part they were originally set. This is of course as much a Leeds of Bennet’s imagination as it is a real place – a heightened world coloured by fuzzy recollections of his childhood and youth as much as it is reality but what strikes – as ever – about these pieces is their rich sense of detail, their ‘lived-in’ quality which could only come from the most keenest of observers. From the specific number of the bus used to the details of the canteen pudding this is a world which feels startlingly – almost oppressively real at times.

When the first piece “A chip in the sugar” begins we are transported into the fastidious world of Graham a middle aged man living with his mother. Theirs is an uncomfortably close relationship of mutual dependence. Socially isolated Graham takes quiet control of his mother’s opinions in line with his own liberal Guardian reading ways ( something he feels is for her own good ) whilst she rely s on him for physical and practical support. All is well until the arrival of an old flame of his mother’s who gradually wheedles his way into her affections with his superficial charm and flash patter.

Chris Chilton’s performance as Graham is excellent avoiding either a knowing impression of Alan Bennet himself (whose mannerisms the character sometimes embodies) or a campy caricature. He manages to illicit sympathy for what is at times an unlikeable character. He manages to capture both the humour and the desperation of the language making the audience both laugh uproariously whilst in the same breath gasp with shock. By performing small actions such as the folding of his clothes and the pacing of the room we get a sense of the obsessive nature and suppressed anxieties beneath the controlled exterior. When the fear and anger burst out it is with a genuine sense of queasy unease.

It’s very special for various reasons: It’s the last show in the Courtyard before the Playhouse undergoes redevelopment.  It’s also my first time directing in my home theatre, and the opportunity to co-direct with James and Amy is really exciting.  We’re each of us working with fantastic, generous actors.  As you may know, four of the monologues have already been on tour around Leeds, so it’s great to offer them out to our community.  It also means we can present a very different show, putting them all together on stage in one big production.
Director: John R Wilkinson

Next came “A woman of no importance” in which we meet Peggy a woman with a sense of herself as the ‘lynchpin’ of her workplace. Flo Wilson gives a subtly powerful performance as Peggy. At first I found her a rather tiresome creation; self-regarding, boring and obsessed with the petty mundanities and power-plays of office life as she is but gradually as the piece progressed my feelings were transformed. Wilson captures a woman both in decline and in denial of her place in the world and the changing nature of her own powers. I began to feel a gradual growing sense of great empathy for a character I had actively disliked and a strange sense of admiration for the self-deluded way in which as her world shrinks Peggy still retains her sense of pride and dignity. What is most impressive about the performance is the physical transformation in which Wilson captures the declining physical powers of Peggy. Wilson manages in her movements to make Peggy grow heavier, wearier and older before our very eyes through subtle shifts in posture, breathing and enunciation. This is also cleverly expressed through the use of costume – her gradual change from smart dress and coat to nightie and bed-jacket , the way Peggy clasps her handbag so tightly– and set as we see the environment gradually change from one of a banal public waiting room to hospital bed. 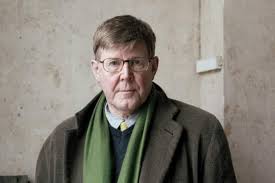 Finally we have “Soldiering On” in which we find Muriel, a woman of advancing years trying to hold things together in the wake of her beloved husband Ralph’s death. Though clearly a member of the upper classes we see as the piece unfolds a gradual stripping away of both Muriel’s physical comforts and her illusions until she is reduced to a state comparatively worse than either Graham’s or Peggy’s. I ended up finding Muriel in many ways the most appealing of the characters due largely to Tina Gray’s performance. She managed to convey a sense of a woman who underneath her bravado and stiff upper  lip was rather lost. Imbuing her with a sense of unworldly niaviety  as-well as vigour and pluck she gave Muriel’s suggestion that her story was “not a tragedy -I’m not that sort” the ring of truth to it which just made it all the more heartbreaking.

Throughout the pieces the setting is first rate whether it is letting us into the dreary and  claustrophobic bedroom of Graham, the fading glamour of Muriel’s chaise longue and packing boxes or the antiseptic melancholy of Peggy’s hospital bedside. The way in which the sets are changed – particularly by the overalled workmen in Muriel’s living room – is also a sophisticated  touch. The use of lighting and sound is minimal but effective too conveying both changes of scene and time and place with shifts in colouration and strength of light.

What shines through – though it is ably abetted by the uniformly excellent cast of course- is the script itself. These three pieces took me on an emotional journey in which I was taken to places I did not expect to go by people I didn’t want to go with. Bennet is able to create characters which have the tang of real life to them with all its ambivalence and complexity. It shows the strength in his writing that even the characters referred to off stage so to speak seem as well rounded and believable as the ones speaking directly to us.

Though there is much humour in the work and I indeed laughed through much of it these three pieces are I feel more tragedies than anything else. Not grand tragedies – that’s not Bennet’s style – but tragedies of lives unlived, of repression, denial and self-delusion, themes which run through these plays like the writing through a piece of Blackpool rock. These are very clever plays indeed which manage with their use of the casual wit and trivial mundanities of ordinary speech to explore difficult topics such as mental health issues, sexual  repression and the damaging binds of family. By tackling these issues with humour, realism and above all humanity Bennet’s work has  lost none of its power or relevance over  a quarter of a century after they were first written.

Posted on June 17, 2018, in England. Bookmark the permalink. Leave a comment.