← The Girl on the Train
An Interview with Isobel McArthur → 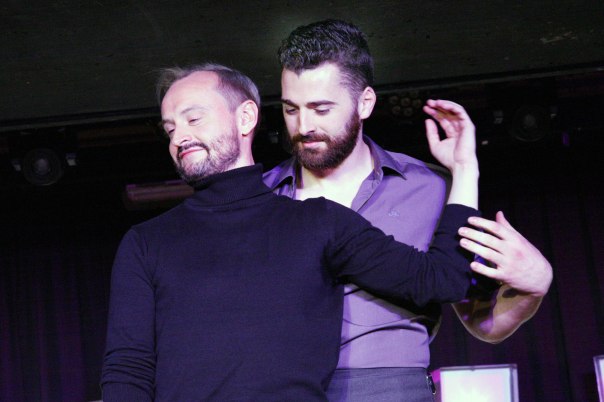 Real men don’t watch, top chick-flick, Dirty Dancing. They may have sat in a room when the DVD was playing but they were not looking. Most probably their thoughts were about something entirely masculine, like the sweaty, raw, grappling, physicality of a scrum at rugby. This could be a problem for Rhoda as she plans the ‘first dance’ at her upcoming wedding, because fiancé Terry is an oval ball enthusiast and a bit of a man’s man, not too keen on Terpsichore. To realise her big day’s dream of recreating the leaping finale in the 1980s film, she seeks the assistance of dance tutor Gavin. His theatrical posturing is not to Terry’s taste and the latter displays his homophobia by directing a shocking epithet at the instructor (cue sharp intake of breath from the audience). Regardless of this, a determined Rhoda will have her way. But there’s another problem, due to their strict religious beliefs, the couple cannot engage in anything involving close proximity, until after they’ve exchanged wedding vows. Adaptable Gavin will have to partner each separately. In this case it takes three to tango; he will be Patrick Swayze’s ‘Johnny’ for Rhoda… and Jennifer Grey’s ‘Baby’ for Terry.

Darren Brownlie’s Gavin is a versatile delight, whether gathering himself in grief, sorrowfully owning the silences, or twisting, flexing, bending (has the man no ligaments) while delivering waspish retorts to any slights. Jo Freer’s Rhoda is the kind of woman who wears the trousers. Not only that, she keeps the Wedding Fund bank card and its PIN number, in the pocket of those trousers. She envisions a precise, fundamental future for herself and the man she hopes to create. Think Lady Macbeth but without the milky kindness. Daniel Cahill’s Terry is caught up in events, struggling with doubts about his upcoming marriage, trying to realise exactly who he is. A solid fortress of a man anxious not to have his drawbridge lowered.

Martin McCormick’s play, a satisfying mixture of the serious and comic, entertains right through to its uplifting conclusion. You’ll have the time of your life.

Posted on May 23, 2018, in Scotland. Bookmark the permalink. Leave a comment.

← The Girl on the Train
An Interview with Isobel McArthur →