← Chic Murray: A Funny Place for a Window
The First Dance →

The Girl on the Train

I approached “The Girl on the Train” knowing nothing about it other than that it was an adaptation of a best selling thriller by Paula Hawkins and that it had already been adapted into a film. I was expecting something of an Agatha Christie style who-done-it by way of Steig Larrson but what I got was far richer and challenging than that.

The play opens onto a bare anonymous space in grey and blue tones as a woman lies in a crumpled heap on the floor. ‘Is she the first victim?’ I wonder but no the dishevelled figure rises and begins to clear up the debris of an apparent party. This is our heroine, Rachel a troubled young woman self medicating the pain away of a difficult break-up with lashings of alcohol. As she teeters on the edge of mental collapse she finds escape from her own drama through the mysterious disappearance of a neighbour.

Rachel becomes embroiled in the investigation itself and finds herself gradually slipping further into obsession as she becomes compelled to discover the truth of the missing woman. Her amateur sleuthing brings her into contact with various characters who are not necessarily what they appear from the woman’s distraught husband, Scott to her condescending therapist, Kamal to her own seemingly kindly and understanding ex husband, Tom. All the while she is trailed in her enquiries by the wryly cynical D.I Gaskill, who though at first dismisses her as a troublesome crank soon comes to suspect her own motivations. 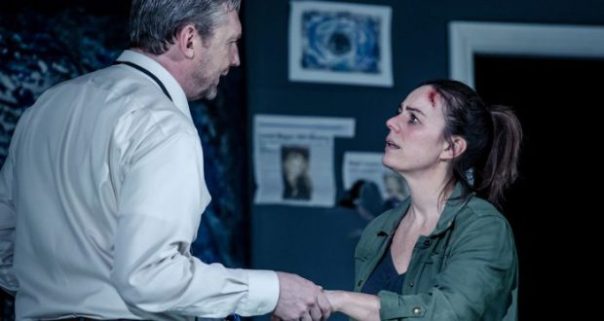 Though it’s plot has the requisite twists and turns one might expect from a superior thriller it soon became clear that this play was far more than that. As Rachel herself refers to her alcohol blackouts’ and lapses in memory it became apparent that for all the guess who fun to be had the play is as much a meditation on the unreliable nature of memory as it is a conventional thriller. All of the characters have something to hide not only from each other but also from themselves as the lies, half truths and unclear memories pile up to reveal how we all twist the past to help construct our identities. The missing woman herself, Meghan appears only in flashback as we see her as a kind of brittle ghost, something of a mystery to even those closest to her. These scenes are beautifully staged, the lighting shifting to a subdued nocturnal blue, the characters standing stock still as the memories are played out and they look on like the audience frozen and unable to intervene.

The production design in general adds a great deal to the atmosphere of the play. There is particularly impressive yet subtle use of sound and lighting throughout which are used to effectively suggest the different environments and moods from the grey starkness of Rachel’s lonely flat to the warm fuzzy light of Scott’s living room. The way the scene changes are signalled by a flash of dark blues and blacks and the accompanied discordant white noise of train-song is also a powerful touch. The colours of the set, all washed out greys and blues are mimicked by the drab colours of the characters outfits which emphasise that we are in ‘any-town’ UK, a place of conformity and blandness which masks a darkness beneath the surface ready to bleed out onto all that sepia.

The set itself is also excellent, built as it is from a series of frames, the outer bright neon cleverly mimicking the rounded edges of a train carriage window the innermost one a modern art painting which draws the eye to the gaping black hole at its centre, a symbol of Rachel’s fragmented memory and the mystery at the heart of the play.
Though this is certainly a dark play tackling complex themes it is not without a sense of humour and the script has plenty of fun ribbing the social aspirations of Tom and his new wife or at times the convoluted machinations of the plot itself.

Though the thoroughly engaging first half of the play ends powerfully- the stage literally dropping back from us as if we the audience are falling into a grave – it is in the second half that goes further into its questions on the nature of identity and memory. Though the script and staging is excellent it is of course the cast who breathe it into life. They do a great job of making their roles believable and naturalistic. Colin Tierney as D. I Gaskill turns what could have been a world- weary cliché into a twinkle-eyed charmer whilst Florence Hall as Meghan creates genuine poignancy from a role which in lesser hands could have been a mere cypher. Yet the show really belongs to the central performance of Rachel by Ill Halfpenny. Played with a humour, charm and sassiness which still manages to capture the sense of rage, desperation and self-loathing bubbling under the surface Halfpenny’s performance is an exemplary study of a woman just about holding it together. It leaves us as the audience rooting for this angry, confused and vulnerable woman as she, through the course of the play grows in strength and understanding gradually coming to terms with the truth of her own past.

← Chic Murray: A Funny Place for a Window
The First Dance →