An Interview with Robin Cairns

A new play by Robin Cairns, The Life of Charles Rennie Mackintosh, is coming to Glasgow. The Mumble caught a wee blether with its creator.

Hello Robin, so where are you from & where are you at, geographically speaking?
I’m fae Clydebank, I live at Shawlands. I spent my days in Govan.

You ran your immensely popular poetry event in Glasgow – Last Monday at Rio – for ten years. There’s been a sea-change recently. Can you tell us what transpired & why?
The Last Monday at Rio poetry night put more than 1000 voices on the stage over ten years. From total beginners to established names. Almost to a decade after we began though the bar was sold to people who felt they could do without 50 odd paying customers in their place on a Monday night. By chance I was asked around the same time to run events in Waterstones on Sauchiehall Street. So we now do Last Monday at Waterstones every month, with up to twenty open mikers and a headline poet doing a full set.

You are quite a stalwart of the Glasgow artistic scene. Can you tell us about it & how it compares to the rest of Britain?
Glasgow’s arts scene is more grounded than most other cities in Britain. We have people doing literature, art and music who have not necessarily emerged from the university blanding process and maybe have a more immediate sense of life’s precarious vertigo.

You’ve been washed up on a desert island with a solar-powered DVD player & three films. Which would they be?
Three films would be “Under Milk Wood”, “Pinnochio” and “The Warriors”

I know you more as a poet, but the theatre has always been a great passion of yours. Can you tell us about Stage Dialogue, for example?
I drifted into theatre around 1980 after answering an ad in a cafe looking for actors. A couple of years on I started writing and producing shows, in Glasgow, Edinburgh Fringe but mostly London. We had some success with shows such as “John Dillinger, From Sepia to Cinema” (with real machine guns) and a staging of the dram when Orson Welles panicked America with his broadcast of “The War Of The Worlds”. Stage Dialogue was the name of our company, a mix of rather brilliant actors and the pushy, punky, young version of me, telling stories in fractured narratives, always wanting shows to be lively and powerful. I had a loyal bunch who tolerated my idiosyncracies – can’t think why!

You are a classic creative polymath; but today we shall be concentrating on a forthcoming play of yours. So, what for you would make a good piece of theatre?
Good piece of theatre has to tell me plenty I don’t already know, so with the Charles Rennie Mackintosh play I read a shelf on the subject, visited almost all the sites, then read the shelf again. Theatre’s got to be gripping, funny, inspiring, tragic, it’s an entertainment and as a writer you must never, ever preach to your punters. 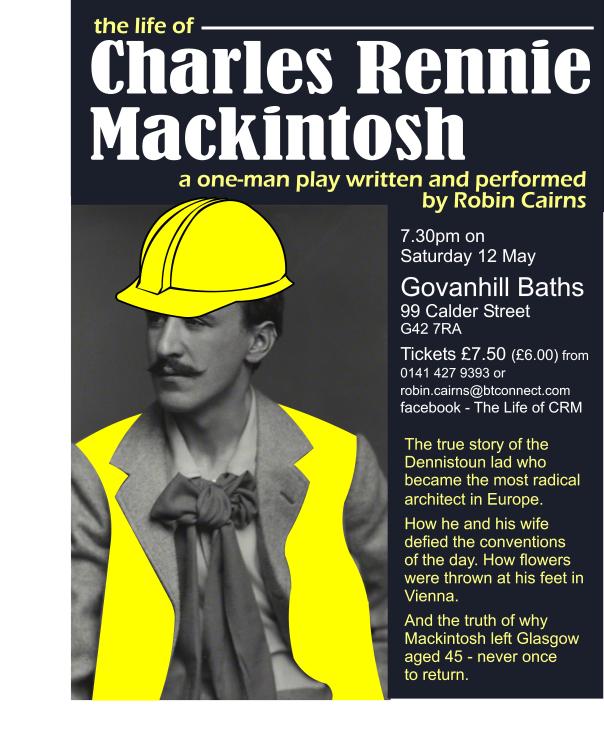 Can you tell us the back story behind the creation of your new play, The Life of Charles Mackintosh?
I’ve been interested in Mackintosh since I visited The Hillhouse in Helensburgh one teenage day when I had nothing else to do. I read and investigated over the years. People knew I had a fair knowledge of the subject so, when an experienced tour guide wanted to retire from showing bus parties of posh people round the Mackintosh sites he asked me to take over. The research for this galvanised me to write the play. And I wanted to concentrate on Mackintosh’s mentor/enemy – John Keppie. I feel that it is in delving into their relationship that I have added something to the diligent work of all the other authors on the subject.

The venue you have chosen for the performance is interesting. Can you tell us more?

Govanhill Baths is a fine small theatre space – in a building which is a hotbed of knitting, swimming, radicalism and community rescue.

What do you think your audience will feel when they are watching your new play?
I believe my audience will feel fulfilled by a grand scale telling of Charles’ life, but the ending is very sad and there’s no getting away from that. Like all tragedies though you know that the bad thing is coming, it’s just a question of how you hint at it and let the knowledge build.

What does Robin Cairns like to do when he’s not being creative?
I like kayaking. I’ve got a red one and can be spotted at Loch Lomond, Lochwinnoch, The Clyde, The Sea. I wear a hat, usually a homburg.

Will you be returning to the Edinburgh Fringe this year?
I’m doing a full run of 22 shows at The Fringe this summer. “The Weegies Have Stolen The One O-Clock Gun” – the tale of a posh bloke called Morningside Malcolm whose lovely daughter has married into a family of Glasgow gangsters. I’m at The Outhouse at 6pm each night, Broughton Street Lane. Tickets from The Fringe Office – £7.

You can catch The Life of Charles Rennie Mackintosh at Govanhill Baths, Glasgow
Saturday 12th May @ 7.30pm

Posted on May 3, 2018, in Uncategorized. Bookmark the permalink. Leave a comment.