← The Persians
An Interview with Lu Kemp & Kieran Hurley → 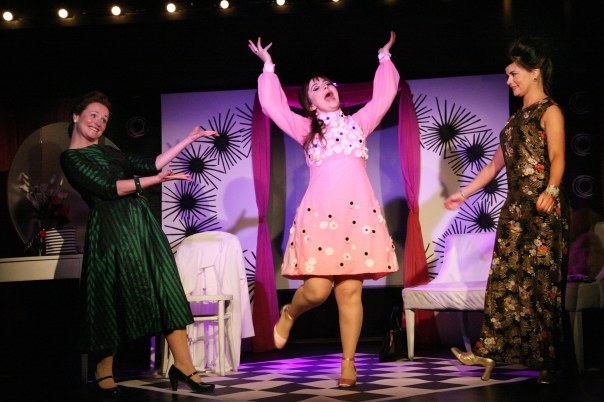 A Play, a Pie and a Pint
Oran Mor, Glasgow
30th May-5th April

For people of a certain age it’s hard to forget Britain’s early entries to the Eurovision Song Contest (‘Sing Little Birdie’ by Pearl Carr & Teddy Johnson, from 1959, anyone?) but we should try. The nascent competition favoured a particular type of perky, bouncy melody with simplistic lyrics and not a lot had changed by 1969, when a troubled Lulu faces singing ‘Boom Bang A Bang’ in Franco’s Spain. Has her voice gone or is it all 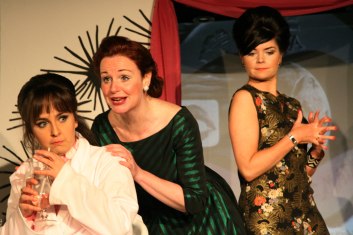 Danny McCahon’s play is set in the singer’s dressing room before she takes to the stage to represent her country. Lulu (Stephanie McGregor) has concerns that go beyond pleasing the audience; she has seen the future of music and it is not MOR. This isn’t what her manager, Marion (Romana Abercromby) wants to hear. She’s more interested in pleasing the BBC and getting future TV shows commissioned. Lulu’s mother Betty (Sarah McCardie) reminds her daughter she’s been performing and charming people since she was four years old and tonight will be no different. Certainly the marshmallow pink dress that Lulu is compelled to wear, looks like it was designed for a four year old but she is assured it will look splendid on the relatively novel, coloured broadcast.

McGregor’s Lulu bears a remarkable resemblance to the pop star, visually and vocally. The fluttering spider eyelashes, the head tilts and hand gestures are all spot on. When she speaks, the slide from the extended vowels of her adopted English to the guttural consonants of her native Glasgow, are delightfully half and hawf.  McCardie’s Betty has a brash confidence and belief in her daughter that is tinged with just a hint of envy that Marie (as she calls Lulu) got out, and got on. Is her green dress trying to tell us something? Abercromby’s Marion is elegant in patterned culottes, with a beehive that’s a testament to the power of hairspray. Her well spoken tones are a template for Lulu’s acquired, Received Pronunciation.

Complex issues of identity, ambition and coming of age are thoughtfully addressed in this play about a young woman seeking to find her own way in the music business. McGregor’s performance of ‘Boom Bang A Bang’ is something to shout about.

Posted on May 1, 2018, in Uncategorized. Bookmark the permalink. Leave a comment.

← The Persians
An Interview with Lu Kemp & Kieran Hurley →