What have the Persians ever done for us?

Well they developed the first modern economy, including the introduction of paper money, instigated the first postal service and invented algebra. But surely all these achievements fade into insignificance, when measured against their contribution to problem solving major decisions. Those determining the outcome had to agree when they were drunk and still agree later, when hung over. 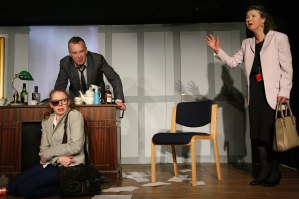 In Tory Ian Wellesley’s Westminster office there’s only Earl Grey, muffins and a political hot potato on offer, when fellow parliamentarians, Kirstin Thompson and Mary Rodgers, join him to discuss a petition in favour of the reintroduction of capital punishment. Agreement proves impossible and in an effort to calm the growing turbulence, Ian breaks out the fortified wine, well any port in a storm. Soon the women are shoes-off drunk and dancing to tunes from the office laptop while Ian struts his stuff to the strains of ‘Macho Man’. Wheels oiled, the ideas on how to handle the tricky petition start to flow fast and thick. There may even be time to sort out Mary’s Northern Ireland too! In vino veritas for sure; what could possibly go wrong?

The author of the drama, Meghan Tyler, plays Mary, a fiery young DUP member dressed in a crisp white blouse and royal blue trousers that wouldn’t be out of place behind an Ulster, Lambeg drum. Her language is as strong as her fundamentalist belief that ‘Dinosaurs are lies’. Liam Brennan’s Ian is a grey suited Conservative, very much the professional politician, all for consensus – if it makes problems melt away. His voice has the resounding, practised tones and rhythms of chamber debate, in contrast to his circumspect manner with his colleagues. Irene Allan’s Kirstin is power dressed in black with dark hair scraped back from her forehead. Sensible, practical, conscious of what it means to represent Scotland, she’s a politician with an eye on the future.

There are energetic but nuanced performances from all three cast members in this enjoyable, cautionary tale of parliamentary pitfalls. Exit polls say yes.

Posted on April 24, 2018, in Uncategorized. Bookmark the permalink. Leave a comment.