← Pleading
Love and Death in Govan and Hyndland →

The Citizens Theatre, Glasgow, has unveiled the cast for its production of Cinderella – an alternative festive experience to round off 2017. Cinderella is recommended for ages 6+ and runs from 28 Nov – 31 Dec 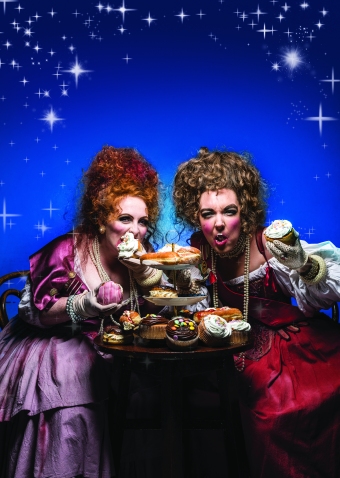 Glaswegians young and old can expect a fun and lively re-telling of this classic fairytale, with plenty of the hallmark ingredients that have earned the Citizens Theatre a reputation for unique Christmas shows.  Citizens Theatre Artistic Director Dominic Hill – alongside his frequent collaborator, composer Nikola Kodjabashia – will bring his inimitable style to this production, deploying a handpicked ensemble cast to present this familiar story of magic and true love, with a twist. Peter Collins, whose comic performances have been at the heart of the theatre’s past two Christmas shows, returns to the company for his third festive season in a row. Peter’s most recent appearance at the Citizens was in Dominic Hill’s highly acclaimed production of The Oresteia: This Restless House (2017). Also returning to the Citizens stage for Cinderella is Irene Allan, whose performance as the Witch in Hansel & Gretel (2016) was described by the Daily Record as “utterly fabulous.” This year, she takes on the role of Cinderella’s stepmother.
Caroline Deyga, in her Citizens debut, is expected to wow audiences with the voice and spirit that saw her jointly nominated for ‘Best Actress in a Supporting Role’ at the Olivier Awards 2017, as part of the eight-strong cast of the award winning Our Ladies of Perpetual Succour (NTS). She will be joined by fellow Citz debutant Hannah Howie who, alongside Deyga, will bring her ‘strong comic timing’ (The Stage) to the production as one of Cinderella’s ugly sisters.  As part of the theatre’s commitment to nurturing new talent, the Citizens is putting its two Actor Interns Nicholas Ralph and Sinéad Sharkey centre stage for this production. Nicholas’s internship is funded by the Robertson Trust.

The company is also delighted to welcome to the stage Jatinder Singh Randhawa, who will be taking a break from the Citizens Theatre’s front of house team. Jatinder recently graduated from North Lanarkshire College with a BA in Acting.  The cast is completed by actor and physical theatre practioner Malcolm Shields, who brings over two decades of experience on stage and screen to this production. Last year Malcolm made a memorable cameo in Ken Loach’s I, Daniel Blake and first appeared at the Citz as Franco Begbie in the theatre’s landmark 1994 adaptation of Trainspotting.

Posted on October 2, 2017, in Scotland. Bookmark the permalink. Leave a comment.

← Pleading
Love and Death in Govan and Hyndland →