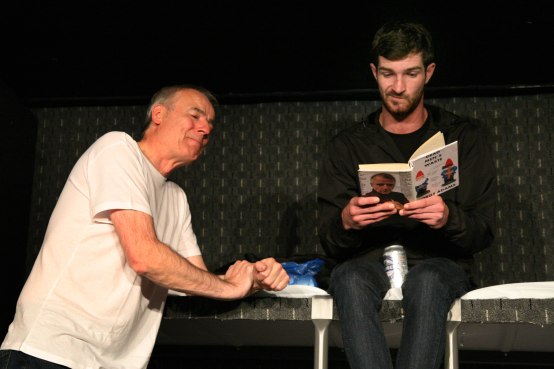 A Play, a Pie and a Pint
Oran Mor
Glasgow
Sept 4th-9th

George (Vincent Friell), a novelist of the gritty Tartan Noir variety, now living in fashionable Crouch End, is forced to share a sleeper berth on the London to Inverness train, in this comedy drama by Simon Macallum. He and his sunglasses are not best pleased. Bren (Barbara Rafferty) the dismissive, overnight attendant is hardly selling the experience suggesting the food’s awful and the good night’s sleep that George is after, can be achieved – but only with the use of earplugs and chloroform. Into the compartment swaggers a young Glaswegian out of Catford called Goags (Neil Leiper) replete with attitude, agenda and poly bag of cans he’s determined to share as he ‘likes a good bevy on the train’.

As they head north, an intimidated George goes through emotional changes, worrying about his family, his bargain-book-bin sales and his fellow traveller’s mysterious black luggage. Meanwhile a probing Goags questions the author’s street credentials, delivering earthy aphorisms with hoodie chutzpah in a claustrophobic, bunk bed set, reminiscent of a prison cell. As wheels turn and plots develop, is someone being set-up and looking at porridge for breakfast? Given the action unfolds in real time, George, a novelist after all, seems a little too easily manipulated by his devious bunk mate. Has he never watched Hitchcock’s Strangers on a Train? Where’s Farley Granger when you really need him?

Posted on September 5, 2017, in Scotland. Bookmark the permalink. Leave a comment.